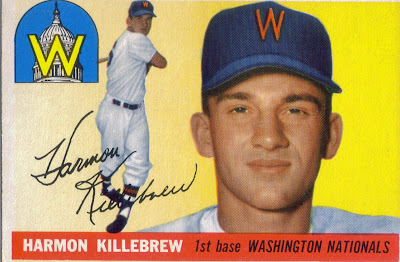 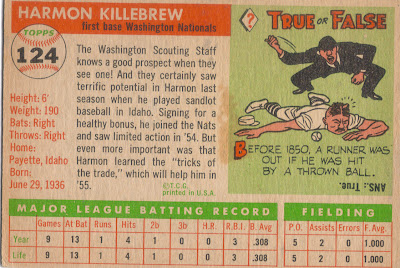 Another huge rookie card from this set is that of Harmon Killebrew (b. 1936). Killebrew is a legend in Minnesota, and one of the greatest home run hitters of all-time. He played in the majors from 1954 to 1975 for the Washington Senators/Minnesota Twins and the Kansas City Royals. He retired with 2,086 hits, 573 home runs and a .256 batting average. At the time of his retirement, he was fifth all-time in home runs.
.
Here are some of Killebrew's accomplishments:

Do you remember how much you paid for this card? I've been looking around for one.

How much is one worth? I need to find out 'cause I have this card (mint condition).
Thanks,

I'd estimate a mint Killebrew RC would be $250 but I imagine it is about to jump in value due to his declining health.

Wow he died a day later. I have this card in good condition and was trying to find out how much it was worth.