I had intended on having the results of my 3 jumbo boxes of 2011 Topps posted earlier (like, Friday), but because of my craptastic connection here at the apartment, I have only now been able to get the pictures loaded. So, here are my thoughts on 2011 Topps. I will post my 'by the numbers' breakdown later on (the way my connection has been going, it looks like it may be posted just in time for 2012 Series 1). 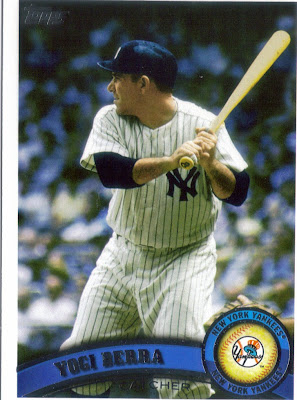 First off, I like the design. I'd be happy if Topps strayed from the plain white border once in a while, but the cards do look great. I pulled 2 of the Legends Short Print variations out of my 3 boxes, one being the above Yogi Berra. 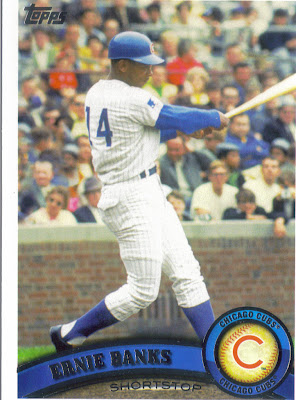 My second Legends SP variation is Mr. Cub, Ernie Banks. Both of the legends cards look great. Some people are tired of these variations, but I enjoy them. I'd be happier if they were Brooks Robinson cards, but with Berra and Banks, I sure won't complain. 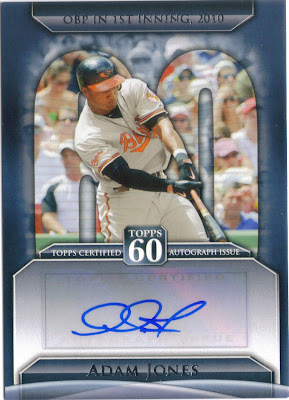 Speaking of Orioles, I got my first Adam Jones auto. I wouldn't have known it was his auto without the card telling me so... His signature just looks like a bunch of loops. 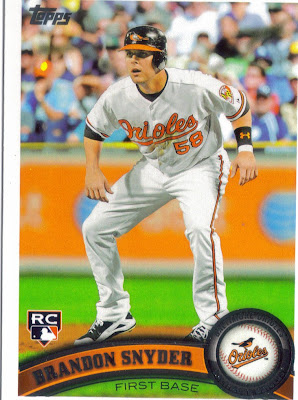 One of my favorite Orioles Prospects - Brandon Snyder. He looks to spend the season at AAA Norfolk due to the signing of Derrek Lee, but that may be a good thing for him. I think he could use more seasoning in the minors. I've met him in person several times and he is a really nice guy. I hope he puts up some good numbers and becomes the O's first baseman of the future. 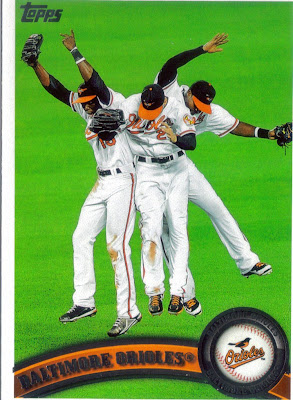 Hey, look, someone tied all of the O's outfielders together. This is a really cool picture of all the O's outfielders. Most of the pictures in this set are amazing. There are a few that are suspect, but for the most part the photos are great. 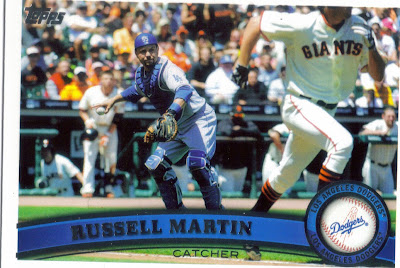 Speaking of great shots, here is one of Russell Martin. I really like all the action in the shot and also the depth that is shown. I wish Topps put in this kind of effort with all of their products. 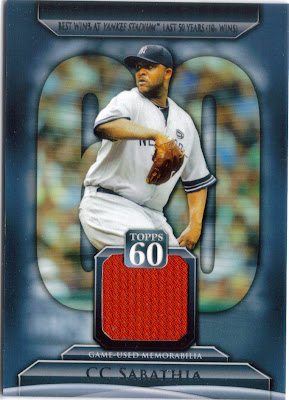 I got a couple decent relics, the best of which was this CC Sabathia jersey. I also got Daniel McCutcheon and Justin Upton relics. 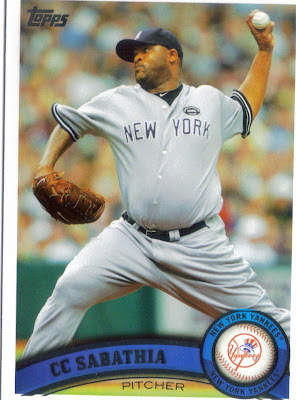 Here is one of the not-so-amazing shots. Again, here is CC Sabathia, and CC's belly. It appears that his stomach takes up 25% of the card. Yeesh. Maybe if he was wearing pinstripes, they'd have a slimming effect? 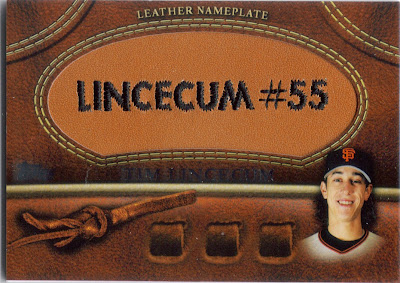 Now we have the leather nameplate cards. I definitely don't like these as much as I liked the Hat Logo patches from last year, but these aren't as hideous as I've heard. I was excited that I pulled Lincecum. I like him, of course, but he has quickly become my son's favorite player as well ('cause he throws nasty, Daddy'). So, this card is definitely spoken for. 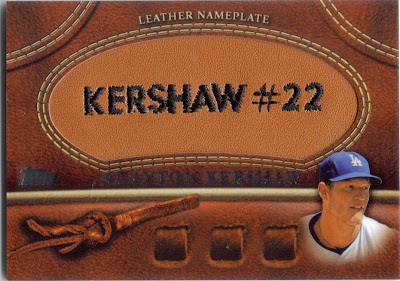 I got Dodgers pitcher Clayton Kershaw. My best friend is a Dodger fan. Card spoken for? Yep, you got that right. 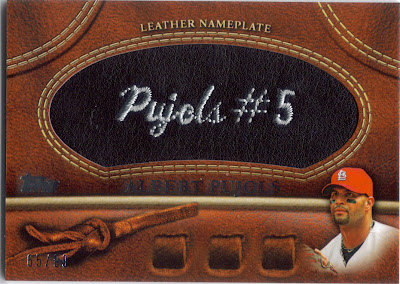 Finally, I got the Pujols black variation. This is pretty cool, I guess. May try to sell it at the next card show. We'll have to see. I imagine that this will be a decently popular card. I'm hoping so at least.
.
Anyway, there you have it, my 2011 Topps jumbo results. What do you guys think? Overall, I was satisfied, mainly because the photos are great. I wish I didn't have to wait for a new Roberts card until Series 2, but oh well. Patience is a virtue, or something like that.
Posted by William Regenthal at 6:55 PM

Awesome cards. If you're willing to trade the Banks SP, I have the Brooks 2010 Topps short print I'll swap for it.

Would you mind sending me a scan of the Brooks? I'm pretty sure I don't have it, but I'd like to see it. Thanks!!

I went to get the card and realized it was FRANK Robinson. Still as an Oriole, though, but I guess I got so excited about the Banks, that I forgot WHICH Baltimore Robinson I had. Sorry for the confusion. I'll e-mail yopu a picture of it anyway.

I got dibs on CC!! Hahahaha nice break dude!