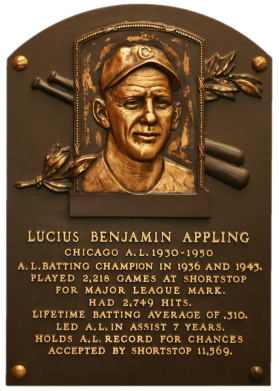 YES, Appling is a Hall of Famer. He is considered one of the best-hitting shortstops of all time. His defensive numbers are suspect, but as a hitter, he was very good, especially for his position. He shouldn't be penalized too much for not winning a World Series, he played on some light-hitting White Sox teams during his tenure there. Sadly, he never reached the postseason at all in his time there.

Baseballs autographed by Appling average around $80 each, while an autographed photo would possibly cost you around $20.

Posted by William Regenthal at 3:30 PM

I would say he's in too, but my argument is this- most shortstops play that position because they are great with the glove, examples being Ozzie Smith, Derek Jeter, and now most recently Elvis Andrus. The fielding percentage is not impressive, but i guess it's the bat that normally counts.