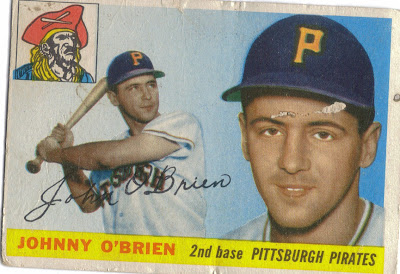 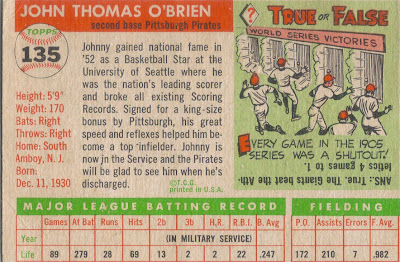 Johnny O'Brien (b. 1930) played in the majors as a backup second baseman and pitcher from 1953 and 1955 through 1959 for the Pirates, Cardinals and Braves. He and his brother Eddie were the first twins to play in the majors for the same team in the same game. He retired with 204 hits, 4 home runs and a .250 batting average. In the three seasons he pitched (1956 - 1958) he went 1-3 with 30 strikeouts and an ERA of 5.61. He and his brother Eddie formed one of only 4 double play combinations (2B - SS) made up of brothers, the others being Garvin and Granny Hamner, Frank and Milt Bolling and Cal and Bill Ripken.
Posted by William Regenthal at 12:00 PM