I Need Some Help! AMAZING NEWS!!!

I just got off of the phone with the one and only Virgil Trucks. You read it right, Virgil Trucks. The same guy who sent me all of the amazing stuff here, and the book here. 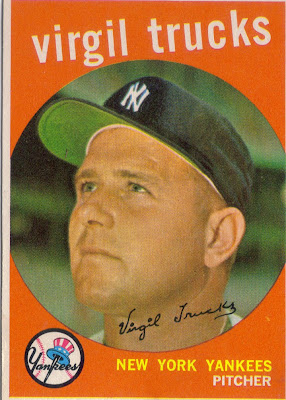 I sent Mr. Trucks a Christmas card and thanked him for all of the awesome stuff he has sent me and other fans. I also mentioned in my letter that I wrote this blog and had featured all of the things he had sent. I sent him a link and asked him that if he ever had the time, I'd love to interview him for the blog.
.
Well, I got a post card from him today thanking me for the Christmas card and letter and he had included his phone number saying that he would be more than willing to oblige the interview!! So, guys, I need some help. I called Mr. Trucks tonight and set the interview up for Thursday at 2PM. I wanted to open this up to some of my readers, if you have a question you would like for me to ask Mr. Trucks, please comment. I'm going to take all of the responses and pick the two questions that I think are the best and ask them to him. Don't worry, I'm sure a couple of the ones I already have planned to ask him will cover some of yours. I want to keep the interview short, as Mr. Trucks is 93 years old and I definitely don't want to be rude or impose.
.
So, what do you guys think? Anyone willing to help me out?
Posted by William Regenthal at 6:23 PM

I came up with three questions:

Has Virgil ever gotten someone's autograph? Not necessarily sports related.

What current players does he enjoy watching?

What is his favorite memory from Spring Training?

That is great news dude, and the two questions I brought up to you were:

- How did you go about facing such legendary sluggers such as Mantle, Musial, Berra, etc.?

- What is your favorite card of yourself and why?

That is AWESOME! Mr. Trucks is a champ and one of my favorites. Congrats!