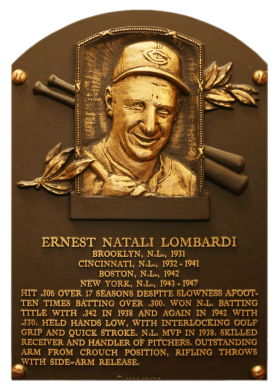 Plaque photo borrowed from www.baseballhall.org
Ernie Lombardi (b. 1908 - d. 1977) was considered one of the better hitting catchers of all time. He played from 1931 to 1947 for the Brooklyn Robins (Dodgers), Cincinnati Reds, Boston Braves and New Tork Giants. Lombardi was elected to the Hall of Fame in 1986 by the Veterans' Committee after failing to be elected after appearing on 9 ballots from 1950 to 1967. During his eligibility, he didn't receive more than 16.4% of the vote. He retired with 1,792 hits, 190 home runs and a .306 batting average.
.
What makes him a Hall of Famer?

Lombardi was one the best-hitting catchers of all-time. Ok, he didn't hit for all that much power, but he definitely hit for average. A lot speaks to the fact that no other catcher would win a batting title between his batting crown of 1942 and Joe Mauer's of 2006. The catching position is a difficult one, and it takes its toll during a grueling season. Being able to hit consistently over the period of time that Lombardi did is definitely noteworthy. Does that make him a Hall of Famer? YES, I believe it does. The Veterans' Committee got this one right.

Lombardi caught both of Johnny Vander Meer's back to back no hitters. He also attempted suicide in 1953 after suffering from depression. He slit his throat from ear to earand begged not to be saved. He was saved, however, and made a full recovery.

An autographed index card from Lombardi averages approximately $70.00 and a signed baseball was not found on Ebay or any other memorabilia page.

Posted by William Regenthal at 7:54 PM