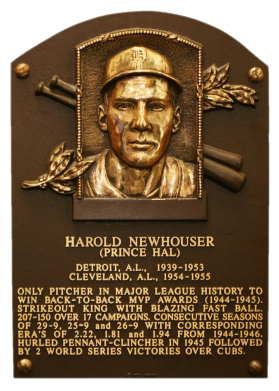 The season that Newhouser went 17-17, he had a 2.87 ERA. In 1942 when he went 8-14, his ERA was 2.45. It appears to me that he was a pretty dominant pitcher on several bad teams. Being the only pitcher to win back to back MVP awards carries a lot of weight. He was an ace of a formidable Tigers rotation dubbed TNT (Trout, Newhouser, Trucks) in the 1940s. In my humble opinion, it took too long to get Newhouser into the Hall in 1992. YES, Hal Newhouser deserves his spot in the Hall of Fame. It is somewhat of a shame that he was only able to enjoy being a member of the Hall for only 6 years, having died in 1998.

Did you know that while Newhouser was a scout for the Astros, he was credited with discovering Derek Jeter? The Astros eventually passed Jeter over for Phil Nevin. Cue the epic fail music.