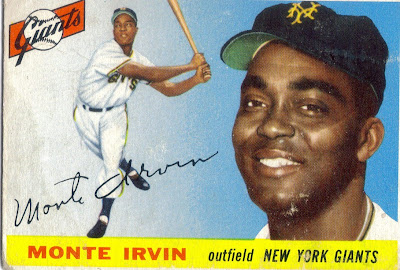 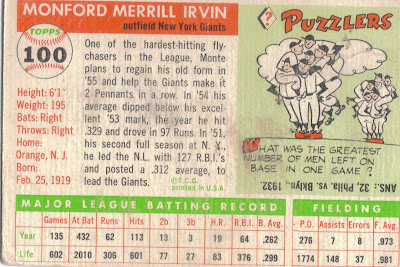 Former Negro League star Monte Irvin (b. 1919) is one of the oldest living Hall of Famers. He was elected to the Hall based primarily on his merits in the Negro leagues, but also had success in the Majors for the Giants from 1949 to 1955 and the Cubs in 1956. He was one of the first Negro league stars to be signed after Jackie Robinson broke the color barrier in 1947. Irvin had career major league numbers of 731 hits, 99 home runs, and a .293 batting average. He won the World Series with the Giants in 1954.
.
In the Negro Leagues, Irvin was a superstar. He was a two-time batting champion there and won the Negro league World Series with the Newark Eagles in 1946.

That's got to be one of the coolest cartoons that I've seen on a card back. Pretty funny.