We spent a good portion of today hanging out in the hotel room because everyone was worn out from last night's festivities. Because Fan Fair was in Downtown Raleigh and our hotel was right beside the RBC Center, we elected to skip the drive today because we all were needing to save some cash, and everyone really got everything they needed yesterday. The Red Carpet player intros were at 4PM today, and the place was packed. We were able to get a good spot close enough to the railing where we got some good autos. I also gave a pen and a puck to a lady in front of me who was playing blocker so her kid could get autos. I had purchased 2 silver sharpies yesterday in hopes to getting some pucks signed... I will be taking them back and will be asking for a refund because they failed epically. 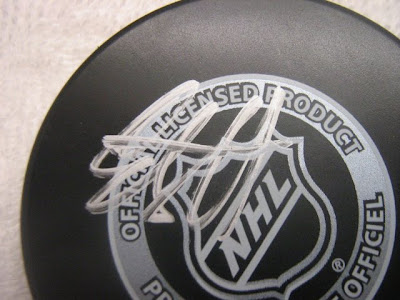 The one time my marker didn't fail, though, was when I was able to get a signature from Carolina Hurricane Eric Staal. I'm glad the signature that worked out was a very good player. 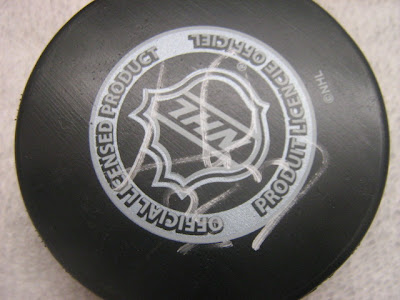 The sharpie kind of worked for Cam Ward, another Carolina Hurricane. I've heard of both he and Staal, so I was happy to get these guys. I wanted to get 18-year old phenom Jeff Skinner, too, but was unable to. Oh well. I'm happy with my score. 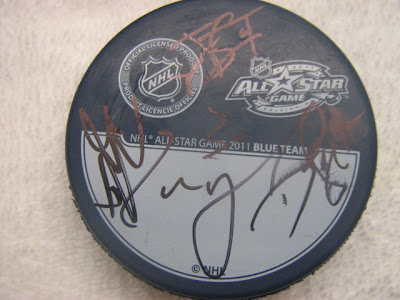 I asked the lady in front of me if she would hold out one of my pucks, and she did so without fail. I was really happy with all the signatures she loaded on here for me. 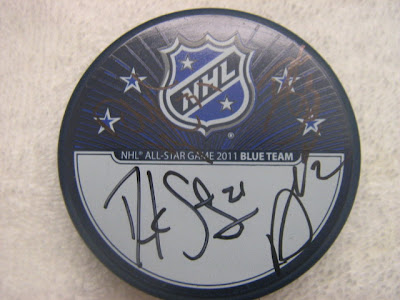 Here is the other side of the puck, which looks pretty sweet. I repaid her by giving her son an official 2011 All Star game puck, which she was very appreciative.
.
I also helped out a really nice kid from Raleigh. We talked some baseball while we were waiting for the players to come out, and when they did, I got his jersey signed for him since there wasn't any room for me to sneak out of the pile and let him in. He was a nice enough guy and I know he was really happy that I got that jersey out there and had it signed by some big named players. I should have taken a picture of it, but I wasn't thinking about that at the time. Oh well.
.
Check back later on for my next post - NHL Skills competition. I took a few pictures from there that I will share.
Posted by William Regenthal at 10:13 PM

Awesome grabs. Too bad the sharpe died out. You might want to try a silver paint pen next time.