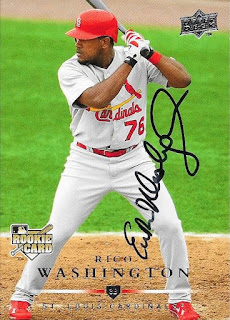 Getting a 2008 Upper Deck card out of my box is always nice, since I seem to have a ton of them, and they usually are in the bottom of the card closet.  This one was signed TTM by Rico Washington and turned out nicely.  I generally like Topps stuff, borders and all, but there is something to be said about how nice a borderless card looks when signed.

Washington (b. 1978) was a 10th round draft pick out of high school by the Pirates in the 1997 June Amateur Draft.  He made the majors in 2008 for the Cardinals, the only season he played in the majors.  He had 3 hits, no home runs and a .158 batting average.  After his cup of coffee in the majors, he went to China to play ball in 2009.  After that, he played in the Independent League.

I mailed to Washington on November 16 and got the card back on February 26, for a 102-day TAT.