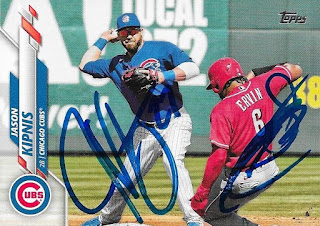 Because I had taken last week off, and the Wood Ducks were out of town, I decided to take some time and do a little out of town graphing.  I originally wanted to take a trip out of state, but with a lot of teams still restricting access to players, I went the safe route and stuck around Durham and saw the Stripers.

Chris, Ale and I met up with Dugan and Jackson to graph arrival and the games.  We did an awesome job, I think.  The 2020 Topps at the top of the post is a Jason Kipnis card, and it just so happened to have Phil Ervin on the card, as well.  They are both on the Stripers now, and I was able to get both signatures on the card. 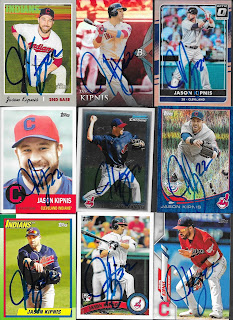 We got Kipnis on a bunch of cards; he was super nice, and generally signed 2 per whenever we saw him.  I think Ale got him on 3 one time, but he was mostly 2 per.  I got some really nice cards signed by him, which was great.

Orlando Arcia was pretty tough; he avoided me until I popped the card I wanted (above, left, 2017 Bowman Chrome Rookie of the Year Favorites parallel) out of my book.  The card looks amazing.  Of course, he signed two cards for Ale; I should have handed Ale the two other cards that I really wanted to get done.  Oh well, I was happy with what we were able to get. 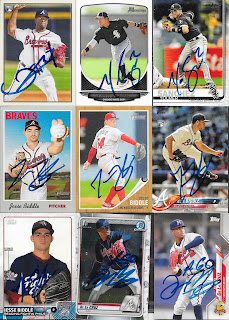 I did tell my friend, Gerard, that I was planning on going to this series, so he sent me a few cards for a 50/50; we got Yolmer Sanchez on his birthday, which was cool.  Jesse Biddle was super nice; Jackson had a really good photo of he and Biddle that he got signed.  He even gave a copy to Biddle. 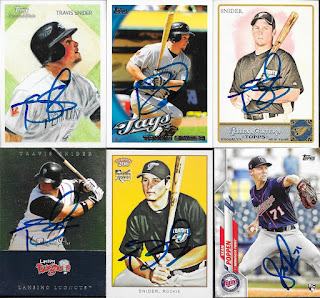 I was really happy to get a few Travis Snider cards out of my boxes, especially the 2010 Topps National Chicle (above; top left). 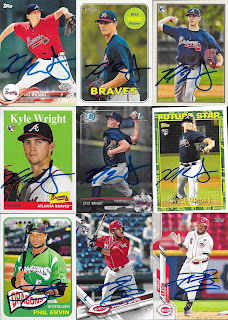 Most of the players were one per, but a few of them signed multiples.  The one per made it tough to finish guys off, but I was happy with everything we were able to get.  Some of the Kyle Wright cards were really great; I enjoyed the two different Topps Archives Wrights that I got signed. 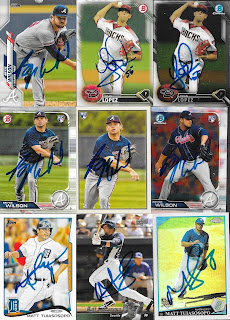 I felt really bad for Yoan Lopez; a panhandler came up to everyone as he was signing and berated everyone, including Lopez.  The guy was clearly out of his mind, so I had to move the boys away from the spectacle. 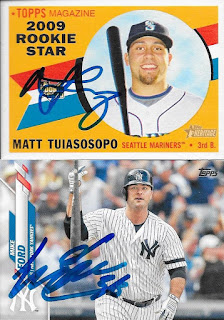 Matt Tuiasosopo signed the 4 cards I had, but I had to do two at a time, pre and post game.  After the game, he asked if he had signed for me before and that he wouldn't sign for anyone he signed for earlier in the day.  Before I could respond, he signed the two cards I had left and moved along.

We were able to get Luis Patino on some really nice cards.  I wanted to get him on one of the Bulls team set cards, but I was completely ok with him signing these instead.  I had pulled the 2021 Panini Diamond Kings; the other two came from a recent card show. 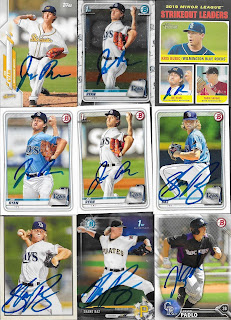 I finally got to see Joe Ryan and Shane Baz; the boys got Baz for me after the second game, as I was still on the Stripers side.  Apparently, I had just missed him when I walked over. 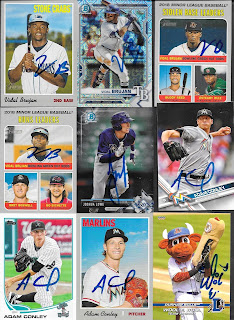 We got Vidal Brujan on a bunch of cards, which was great, since I just found out that he is about to be promoted. 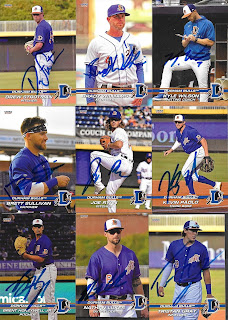 We bought Durham Bulls team sets, and worked to get them signed while we were there.  There were already several guys in the set who aren't with the team anymore (Wander Franco).  Still, it was fun to get some signed.

I doubt we will finish the team sets, but it was nice to add the cards to the books and see what we could get done. 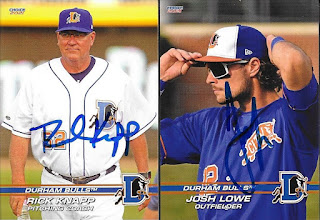