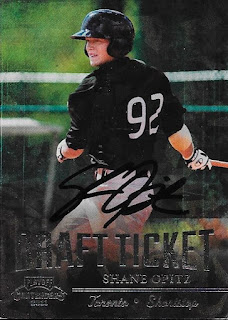 This 2011 Panini Playoff Contenders card that I got signed TTM by Shane Opitz looks a lot better in person.  The card has qualities of an atomic refractor, but the scan didn't really pick that up.  It looks great in person, though.

Posted by William Regenthal at 12:03 AM