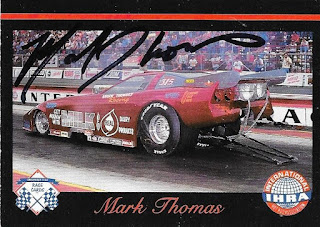 When I searched for 1989 IHRA Chrckered Flag cards, I was mainly looking for some of my dad, but I also picked up some of a couple other guys who I know from back then.  The goal was to get some that I could send TTM and add to my album.

I met Mark as he was being towed back to his pit area at the Gateway Nationals in St. Louis in 1989.  I had ran up and asked him of he had any of these cards (since i had seen him win the Winternationals on TV earlier that year).  Obviously, he didn't run a race with the cards in his pocket, so he didn't have any on him.  The next morning, outside of the racetrack, Dad was getting fuel at a gas station and I was sitting in the truck.  Someone tapped on the window; it was Mark with a handful of cards.

We have kept in touch since then, and I was able to watch his career play out.  Always a great guy, it was really awesome watching him, over time, become the legend that he is.

Mark has since retired to his farming operation, but we still keep in touch.  I've been trying to talk him into stepping into a gear jammer so he can come down and enter the race Dad puts on every year.

I mailed to Mark on January 25 and got the card back signed on March 11, for a 45-day TAT.  I sent two cards and gave one of the to Chris once they came back.  Mark also included a note asking me to tell Mom and Dad hello.  Thanks so much, Mark!

Posted by William Regenthal at 9:30 AM