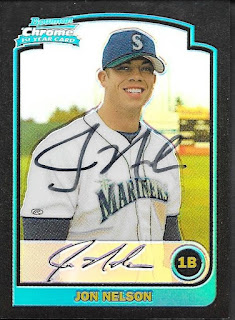 This 2003 Bowman Chrome refractor of Jon Nelson was found in one of the many boxes I got when my LCS closed.  It is a nice card, so I figured I would see if Nelson signed TTM.  He does, so I sent it off.  The card came back signed not too long after, and looks a lot like his faux auto shown at the bottom of the card.  It can be funny sometimes to see how their autographs change over time.

Posted by William Regenthal at 11:40 AM