June 27, 2021 Graphing of Drive at Grasshoppers 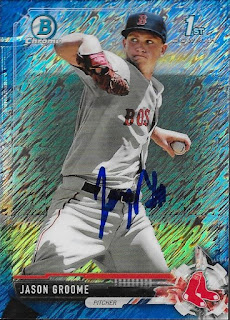 Last Sunday, I took my son, Chris, and my little cousin, Ale, to Greensboro to see the Greensboro Grasshoppers take on the Greenville Drive.  I also was going in hopes to finish what I started on Greenville while Ale and I were in Winston-Salem before he and I were shut down.
We did really well graphing inside and outside the stadium, EXCEPT I missed Jay Groome again.  He didn't sign outside, and I was left with my ton of Groome cards, still.  Thakfully, I had given the two best cards to my friend, Dugan, and he got those done.  The above 2017 Bowman Chrome blue shimmer was one of them.  It turned out great. 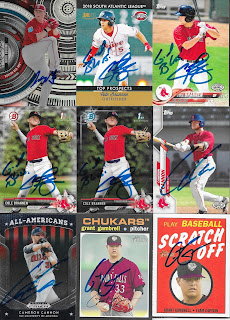 The other card was the 2017 Bowman Tek (top left).  I had been holding on to those cards since 2017, so I was happy to get them signed.  We were able to get everyone else that we set out to get, which was nice. 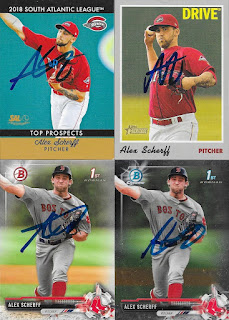 I was really glad to finish off most of my Greenville stuff.  I had it pulled, and had I not finished most of it, there would have been a bunch of stuff going back into my boxes.

The Elih Marrero 2015 Stars and Stripes was found in a box after the trip to Winston, though.  Thankfully, I pulled it when I saw it and put it in my Greenville pile.  I need t do a better job of pulling stuff when I see it, instead of telling myself "Oh, I'll grab that out of the box the next time around. 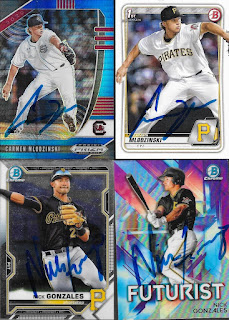 On the Greensboro side of things, I had pulled some stuff with the thought that I would hit that team at some point this season, so getting stuff together for this series was a lot easier than it normally would have been.  Plus, Dugan was going by there, as well, so I had a couple guys pulled for him as well.
Nick Gonzales hit a homer while we were watching the game.  He signed one per, and only signed after the game.  When he did sign, however, he was really nice. 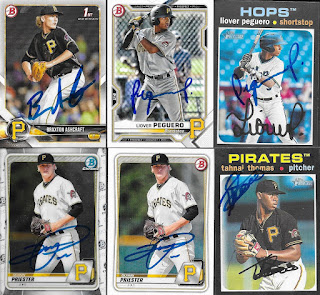 Dugan had gotten me a Liover Peguero autograph when he got my Groomes signed for me, so I included it here, as well.  I got my own Peguero (the 2020 Heritage Minors), as well. 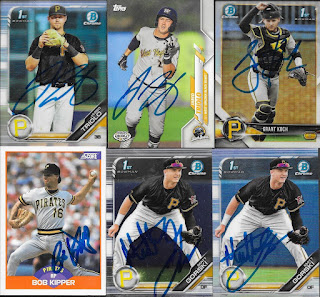 We all had a really good time at the Greensboro game.  Ale did a great job getting autographs, even though he hadn't done it prior to our trip to the Dash game weeks before.  He even told me he enjoyed graphing, which was nice to hear.  Hopefully, he keeps up with the cards I gave him when the trip was over.

Posted by William Regenthal at 11:20 PM