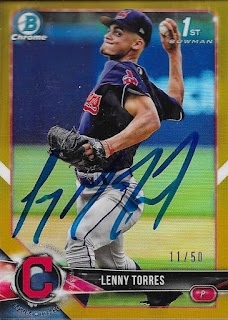 A snap decision to take a look at the Lynchburg Hillcats while they were in Zebulon facing the Mudcats led me to almost missing getting several cards signed.  I had a couple guys send me Lynchburg cards to get signed as a 50/50 just in case I saw them, and I had some put aside from 2020 and 2021 Bowman.  I missed the guys I had pulled back in 2018 and 2019 and put aside in a Carolina League graphing box that I had put together.  Thankfully, about 15 minutes before we left for Zebulon, I remembered that I had that stash of cards.  I got them all prepped and into my snap case in time to leave for the game, then loaded them into my books for pre-game.  One of the cards was the above 2018 Bowman Chrome gold refractor of Lenny Torres. 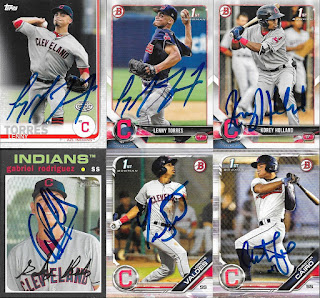 The day actually called for a double header, and I came only armed with Hillcats cards in three books; me; my son, Chris and my friend, Tyler.  We were able to finish up everyone by the start of the second game, which was great, because it was super hot and humid out there.  We ended up leaving halfway though the second game since we were really tired and thirsty (and didn't want to continue to pay $6.00 for bottled soda). 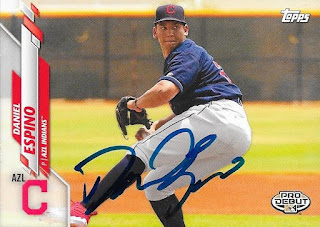 I was worried that I wouldn't be able to finish off some of the cards, since this would be the only time I would see the Hillcats.  Luckily, none of the players limited, and we were able to see all of the ones I had brought cards for.  Daniel Espino was especially nice, signing everything that each of us had, and also carrying on lengthy conversations with each grapher he came into contact with. 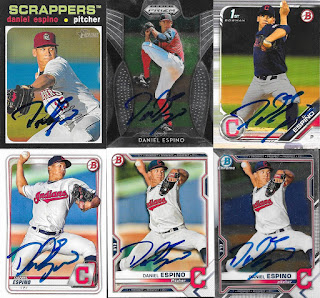 I had a whole bunch of different Espino cards, and I was really happy with how they all turned out. 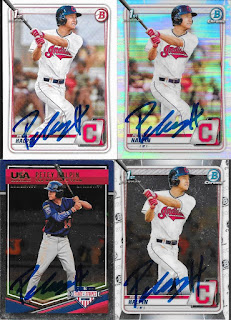 Finally, we were able to get Josh Wolf, who also was really nice, and talkative.  The whole group of Hillcats that we saw were all super nice and talkative.