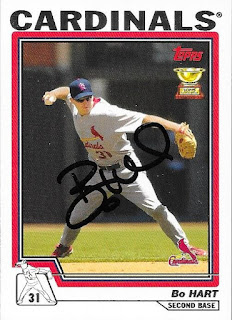 This 2004 Topps Bo Hart was liberated from a complete (almost) set that was being tossed out at my former LCS.  I couldn't let them just throw the cards away, so I was glad to take one of them off of their hands.  I pulled some cards out of the box of guys who signed, and this Hart was one of them.

Posted by William Regenthal at 6:42 PM