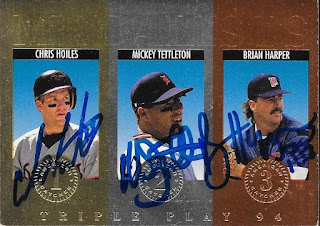 This 1994 Triple Play Medalists card has kind of become an old friend, as far as signed cards go.  I worked to get the card filled with autographs, and finally finished it when I saw a private signing with Chris Hoiles pop up.
I didn't think it would take long to fill the card, then the Orioles canned Fan Fest... Then COVID happened.  I figured Hoiles would be an easy signature. 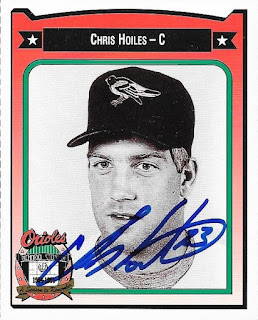 So, I waited and finally, a private signing came up.  I sent the medalists card, as well as this 1991 Crown Orioles.  Both look great, and I can finally let that medalists card rest in my album.  Now, I just need to figure out which album I took it out of in the first place.

The tri-colored foil on that Triple Play card is great. I always liked that insert set.