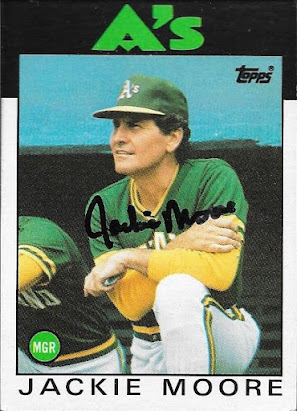 I moved a couple cards out of my 80s boxes when I got these two cards signed by Jackie Moore.  I always heard Kevin Kennedy talk on XM about how great a bench coach Moore was for him, so it was nice to put a face (and signature) with the name.  Kennedy hasn't been on XM in years, but when he was on, I always enjoyed listening to him.
The above 1986 Topps signed by Moore turned out really well.  This set looks really nice when signed. 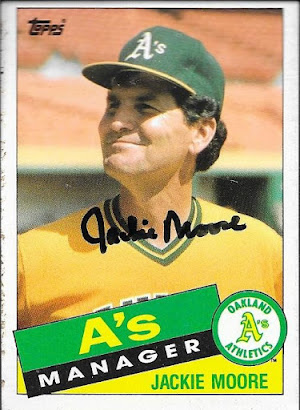 This 1985 Topps also looks nice.  I also sent Moore a 1973 Topps Whitey Herzog card (Moore is shown as a coach on the card).  Moore signed it, then I sent it on to Herzog and Chuck Estrada to complete the card.  It'll get posted on here eventually.