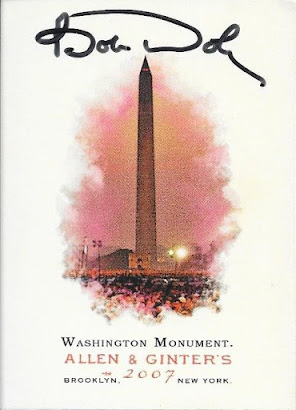 While I despise talking about politics, I was so super excited to get this TTM success back from former senator and presidential candidate, Bob Dole.  I was trying to figure out a way to get rid of some of the many cards  in my boxes like the above 2007 Topps Allen & Ginter Washington Monument card.  I thought that the 10 or so of those cards might work well if I tried to get some former politicians on them.  Dole was the first one that I tried, and it was a success!  The card looks really cool, and unlike a lot of other politicians, it definitely isn't signed in autopen.  He definitely used a Sharpie to sign it, as can be seen in the above scan. 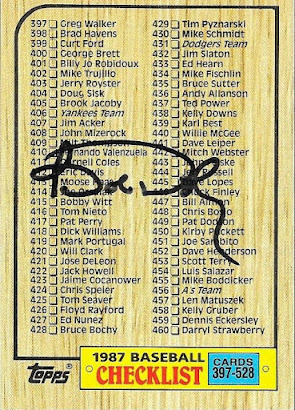 I also used this as an opportunity to add another signed checklist to my 1987 Topps set.  Those get tough to get signed, as a lot of the people I've sent to haven't understood why I was asking them to sign.  I explain it in my letters, but still have gotten many back unsigned.  Still, when I do get one back, I get excited and happy to add another prominent figure to my set.

Dole attended the University of Kansas before serving in World War II.  While at Kansas, he played for the basketball, track and football teams.

Posted by William Regenthal at 11:01 AM

the ginter looks nice. i wonder if he would have signed a hideo nomo dodger card with the LA logo on it.

That's a cool TTM! I'm not getting the connection to 87 Topps though...?

There isn't a connection to 87 Topps other than he was active as a senator in 87. I just use the checklists when I don't have anything else to send folks, since i have like 200 of them.

Great use of the Washington Monument card. Congratulations on the return. What other signatures have you collected on those 1987 Topps checklist cards?