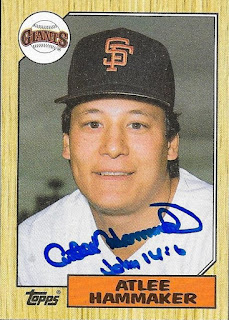 I had sent to him TTM, but the card never came back, so when I saw that Atlee Hammaker was doing a private signing, I went ahead and sent a card.  The card came back looking great, and is another one I can cross off of my list for my 1987 Topps set.

Wasn't a Giants fan, but I did like Hammaker back in the day.