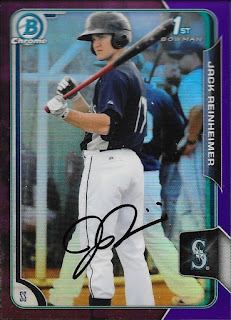 Stepping away from vintage cards for a bit, here is a nice 2015 Bowman Refractor that I got signed TTM by Jack Reinheimer.  It turned out a lot better than I thought it would.

Reinheimer (b. 1992) played in the majors for 2 games in 2017 with the Diamondbacks.  He's currently with the Reno Aces, the AAA affiliate of the Diamondbacks.  What I didn't realize was that he was from Charlotte, and he played at ECU.  He's only batting .236 so far this season, so hopefully he will heat up and see his way back to the majors, where he hopefully will collect his first hit.

I mailed to Reinheimer via Diamondbacks spring training on February 15 and got the card back on March 26, for a 39-day TAT.
Posted by William Regenthal at 5:33 PM