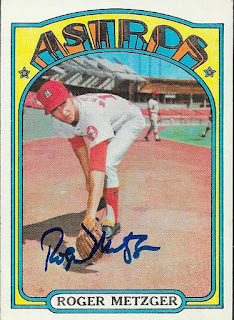 Another vintage TTM success came about with this return from Roger Metzger.  The cards I sent off were 1972, 1978, 1979 and 1980 Topps.  The above 1972 looks really cool, with the old stadium shot and some guy photo bombing in the background.

Not that I really look at it, all of the cards I sent are empty stadium shots.  That is always interesting to me, where they take the shots.

I mailed to Metzger on February 24 and got the cards back on March 26, for a 30-day TAT.
Posted by William Regenthal at 5:48 PM