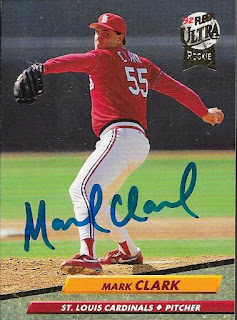 I added some nice cards with this TTM success from former pitcher, Mark Clark.  The above 1992 Fleer Ultra turned out really nice.  I have a ton of these, but never get around to searching that box.  I hang closer to Topps stuff, but I may have to grab a few more and send them out.