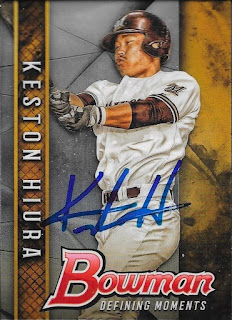 I had missed about a month of Wood Ducks baseball games due to many reasons: I got sick, my brother got married, I went out of town to visit another brother, and Chris had a bunch of little league games.  I finally got back to Kinston last week and saw the Carolina Mudcats take on the Down East Wood Ducks.

I was really excited because I had the opportunity to get a bunch of cards out of my Bowman box for some of the Brewers prospects that I would see.  I had a ton of Keston Hiura cards tha I hoped to get signed, and he didn't disappoint.  He ended up signing 16 cards for Chris and I, as we were able to get him pre and post-game. 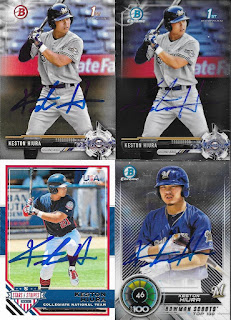 Even with all of the Hiura cards that I had, I was still able to get some 50/50s done for my friend, Gerard.  I also was able to add some brand new 2018 Bowman stuff to the stack.

I got some 50/50s done on Marcos Diplan, but also some cards for myself.  I had gotten him last year toward the end of the season, but it was nice to get some 2017 Bowman Draft done. 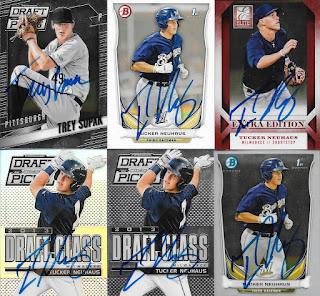 Tucker Neuhaus was really nice, and signed everything that I had.  All of these cards look really great in person. 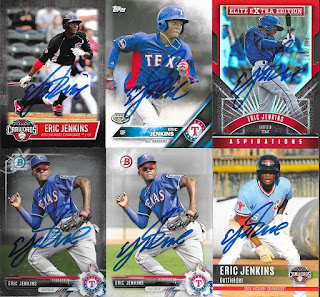 The Wood Ducks called Eric Jenkins up from Single A Hickory to replace the injured Ledarious Clark.  I had a ton of Jenkins's cards that I wanted done, and he knocked them out for me. 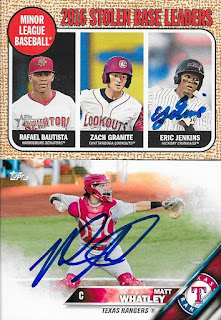 I also got a bunch of the photo cards Rangersautos sent me for a 50/50.  They all turned out great, and I am almost done with his stuff, now.

I also just about finished all of the Matt Whatley cards that I had.  He was injured at the beginning of the season, so it took a while to get some of this stuff taken care of.

I took some more Jake Lemoines out of my box, so those have been whittled down as well.  I also added some cool team set cards of Carlos Maldonado that were part of a 50/50. 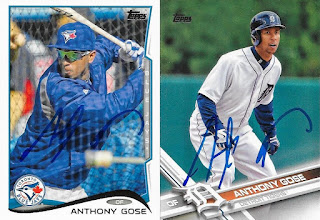 I was surprised to see former Major Leaguer Anthony Gose on the Wood Ducks roster.  He signed with the Rangers in the offseason, and they are attempting to convert him to a pitcher.  I was able to add a couple Topps cards to my autograph project, which was nice.  It was especially nice to be able to add a 2014 Topps to my ledger, as I still don't have many of them in the album.

So, I'm glad to say that I am back graphing the Wood Ducks.  I missed going there, and was able to hit 4 games this past week.  There will be another post coming with the Dash series.  Stay tuned.
Posted by William Regenthal at 8:32 PM