May 5, 2018, Graphing of Louisville Bats at Norfolk Tides 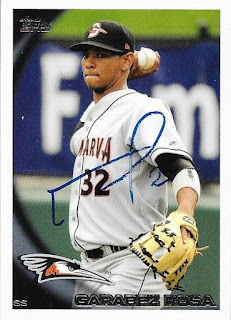 I'm no longer sick, I have missed the last couple Wood DUcks series due to prior obligations, and they were out of town this weekend, so I decided to go  on the road for the first time this season.  My son and I went to Norfolk, which is about 2 and a half hours away, and see the Tides take on the Louisville Bats.  I had goals of getting Nick Senzel and Dick Schofield, but I failed at those parts of the trip.  Still, Chris and I did really well, and we came away with some great autos.

The best part was that I was able to go through my boxes at the last minute, pull some cards out that had been in there for a long time, and ge tthem signed.  The above Garabez Rosa is a prime example.  I have had this 2010 Pro Debut since I bought the back back in 2010, and had hoped to get it signed.  It didn't turn out the best, but it is still signed. 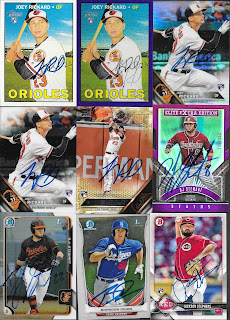 Overall, we had a great time at the game last night.  The weather was really comfortable, even though it got a bit chilly toward the middle of th game.  The Tides won 8-3 behind two home runs and 5 errors from the Bats.  Jonathan Schoop was there on an injury rehab assignment, so we got to see him, too.  We weren't able to get him on any cards, but with what we came away with, I'm ok.

The worst part of the game was the woman with season tickets near where we (and some others) were standing, waiting to get autographs.  She was really snarky when I asked if I was in her way of her seats, then she loudly called Chris out for supposedly not saying excuse me as he walked past her.  Let's not mention that he DID say excuse me, or that she never uttered those two words when we were standing near her seats.  I think she was just a miserable person who enjoyed passing that off onto other people.  I knew Chris said excuse me, but I tried to diffuse her situation by saying I would handle his "lack of manners", to which she replied "It's not a big deal, kids don't listen to their parents anyway..."  That told me all I needed to know.  However, the group behind us was a bunch of screaming 12-13 year old boys, so I'm sure she just enjoyed that.  The boys behind us (and their families) were very friendly, and we ended up chatting with them throughout the game.

Back to the cards.  I ordered two Staedtler pens from Amazon, and last night was the first time we have used them.  Overall, they worked great, but two of the cards (the 15 DJ Stewart refractor above and the purple Joey Rickard Heritage) didn't turn out too well.  They had been pre-prepped prior to Fan Fest, but I guess maybe they didn't take.  I had heard that you didn't need to rep with a Staedtler, but I guess I should keep it up.  Oh well, they're still signed. 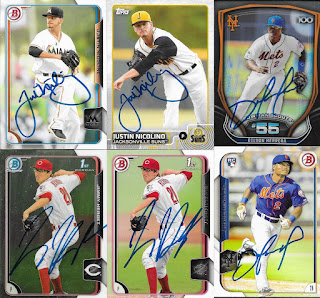 As you can see, everything else really looked sharp.  The coolect thing was being able to snag Dilson Herrera, since he didn't have a number on the roster, but I recognized him based on his cards, which I am usually terrible at. 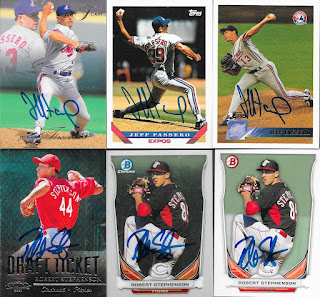 I was glad to use a couple cards (two the Fasseros) that I got last weekend in a box lot from Goodwill, and a card out of the 1996 Topps box that I bought a couple months ago.  I was also able to use a few of the tons of 2014 Bowman that I have.  It really feels good to be able to pull a few cards from my boxes and not have to return them there.
Posted by William Regenthal at 11:58 AM