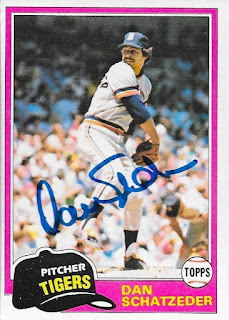 I'm slowly knocking my "to be blogged" stack down, and continue today with this TTM success from Dan Schatzeder.  The cards I sent are from some of the sets I have sent the most of, and they all turned out really well. 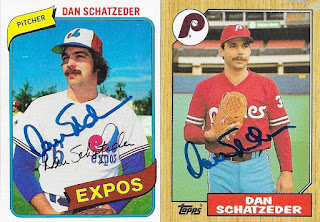 I had actually purchased a partial set of 1980 Topps, which are in order, and they have really helped me find cards of guys from that era.  Since that is my birth year, I enjoy sending those out and running the numbers up on that set.  The 1987 Topps on the right turned out well, but I just noticed the damage at the top of the card.  I should have found a better copy, but oh well.

I mailed to Schatzeder on February 27 and got the cards back on March 23, for a 24-day TAT.
Posted by William Regenthal at 5:37 PM