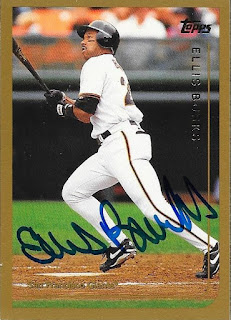 I participated in another private signing on sportscollectors.net when I sent off this 1999 Topps Ellis Burks.  Originally, I wanted to get Burks on a 1987 Topps, and could have sworn he was in that set.  BEFORE I checked the checklist, I searched my box, but couldn't find his 87.  It turns out, he has a card in 1987 Topps Traded, but not in 1987 Topps.  Instead of giving up on Burks altogether, I decided to go ahead and send a card anyway, so this 1999 Topps made the cut.

I always liked Burks.  I thought he was a really underrated player, and ususally could be counted on when playing baseball on Sega.