May 12, 2018 Graphing of Delmarva Shorebirds vs. Columbia Fireflies 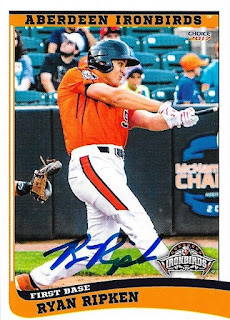 It's fun graphing stadiums for the first time, especially when you have no clue as to where the players come out, and how accessible a stadium is.  Luckily, I was still successful last weekend at the Columbia Fireflies game.  I had a ton of cards for the Shorebirds, since they are the Single A affiliate of the Orioles.  I probably took away from some future graphing of the Keys, but since none of these guys are guaranteed of advancing, I went ahead and knocked them out.

I was most excited about meeting Ryan Ripken, son of Cal.  He was really friendly, and chatted with us for a bit. 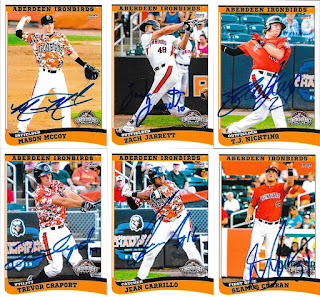 My friend, Michael, picked up an Aberdeen set for me last season, and a few of those guys moved up to Delmarva to start the year.  That afforded me an opportunity to get quite a few cards done.  One interesting note, Zach Jarrett is a fellow graduate of UNC-Charlotte, which I made sure to point out to him.  What I didn't know up until a week before the game was that he is the son of former NASCAR champion, Dale Jarrett. 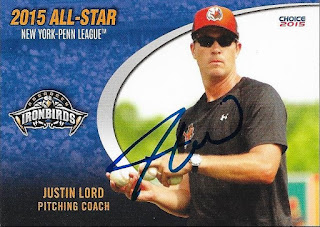 Justin Lord, one of the Shorebirds coaches, was the first auto we got.  He was at the wall talking with his family and signed for us after I helped take a photo of his family for him.

I was able to get some older Aberdeen set cards done that I had been sitting on for a while.  I also was glad to get a few of my 2013 Perfect Game cards signed that I got at the National last year. 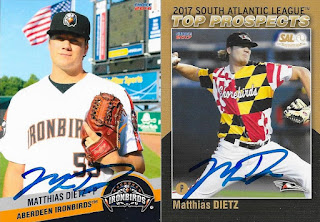 Matthias Dietz was really nice.  He had a pretty cool mustache going, and we talked about that for a bit while he was signing these cards.  I especially like the Maryland Flag jersey on the 2017 South Atlantic League Prospect card.

Finally, here are some of the other Ryan Ripkens that I got done.

I wanted to get the Fireflies postgame, but we were all tired from a busy day, so we left early (after 14 total runs were scored) and went out to eat.  I plan on going back this season and graphing with my brother.  I'm sure he would be up for some graphing...
Posted by William Regenthal at 5:33 PM