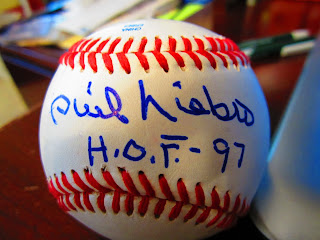 I got my 32nd TTM success and my 47th hall of fame signed baseball on Friday, September 9, 2011 from former Atlanta Brave Phil Niekro.

I mailed to Niekro on August 29 and got the ball back on September 9, making him an 11-day TAT (but this might have been shorter had I not sent so close to the Labor Day holiday).  He signs for a fee of $20 for baseballs and inscribed my ball with his HOF induction year.  Pretty nice signature, too.
Posted by William Regenthal at 5:11 PM