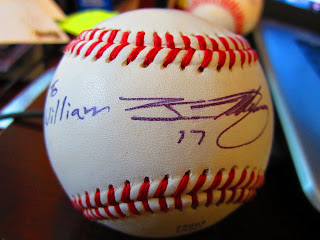 My 30th TTM success came yesterday (the same day I got Mike McCormick) in the form of the above baseball.  Orioles #1 draft pick (4th overall) from the 2008 draft, Brian Matusz.  I mailed to Matusz on February 10, 2011 and got him back yesterday (September 2, 2011), making him an almost 7-month TAT.  Yikes.  I sent to him during spring training in hopes of a quick return, but had to wait pretty much all season.  Matusz has had a forgettable 2011 campaign.  He is currently 1-7 with a 9.07 ERA.  Pretty darn terrible.  It appears that he didn't take the past offseason as seriously as one would hope and came into spring training out of shape.  He missed a week in spring training after having a wart removed from a finger on his throwing hand and then missed about a month thereafter when he strained his intercostal muscle.  He seems to have not yet recovered fully.

I have been very disappointed in Matusz's performance this year.  He was supposed to lead the Orioles pitching staff after posting a strong finish last year.  Instead he has been getting battered around and his rotation spot will be skipped today when the O's take on the Rays.  I really hope Matusz regains the form that brought him to the Majors, but at this point in time, maybe he should be shut down for the remainder of the season and work toward beginning 2012 healthy.

I have signed baseballs from 6 Orioles former #1 picks - Brandon Snyder, Billy Rowell, Matt Wieters, Brian Matusz, Matt Hobgood and Manny Machado.  That is every Orioles first round pick from 2005 to 2010.

Thanks for signing my ball Brian.  Let's hope there are much better days ahead in your future as an Oriole than we are seeing today.
Posted by William Regenthal at 2:57 PM

Although he's having a rough year this year, I'm still glad you got the ball back signed. Any autograph is better than no autograph!