We went to game 3 of the Mills Cup last night in Kinston, NC.  The Mills Cup is the World Series of the Carolina League and this year it features the Frederick Keys and the Kinston Indians.  This series is a win-win for me, because the Keys are the Orioles' High A team and this is the final year of the Kinston Indians (who have become my home MILB team, since we moved in 2009).

Of course, I left the house without my camera, so I have no actual photos of the game, but I was able to leave with 2 mementos. 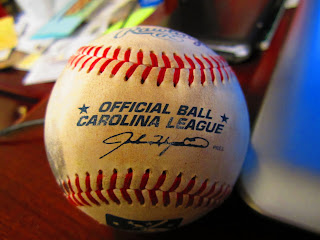 We had to leave the game early because my wife had to be at work at 5am, and our son gets on the bus at 6:55am.  On our way through the parking lot, I spotted something between two cars.  I walked over and looked closer and found this foul ball.  I have several Carolina League balls, and it is always cool to get others, but this one is especially nice because I nabbed it during a championship series.  Not bad. 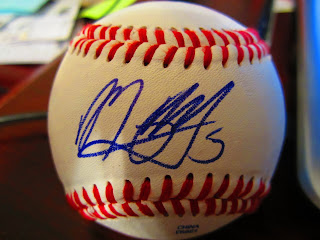 Also, I got another autograph of the Orioles' 2010 first round draft pick, Manny Machado.  This time he signed my ball on the sweet spot.  My son got a ball signed by a bunch of the Keys' players, especially after one of the pitchers asked him to throw it to him.  The pitcher (named Will Startup) took the ball and had everyone in the bullpen sign it for him.

We had a great time on a beautiful night.  I hated leaving early, but being able to get my son out of bed easily was a nice reward for getting home at a reasonable time.
Posted by William Regenthal at 6:18 PM