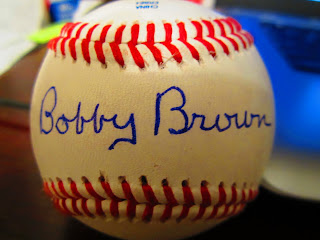 I know what you're thinking.  That I sent this ball c/o Whitney Houston.  Unfortunately (well, maybe fortunately), this is not THAT Bobby Brown.

I sent to the former AL president and former Yankee Bobby Brown on August 26, 2011 and got the ball back yesterday, September 3, 2011 making this a 8-day TAT.


Brown left the Yankees (and baseball) after the 1956 season to become a cardiologist.  He would return to MLB in 1984the early 1980s as the president of the Texas Rangers and then succeeded Lee MacPhail as president of the AL from 1984 to 1994.

Brown is my 31st TTM success.
Posted by William Regenthal at 10:03 AM

Hey I wonder who gave you the idea to send to him... ;) nice success man, i gotta get him myself!