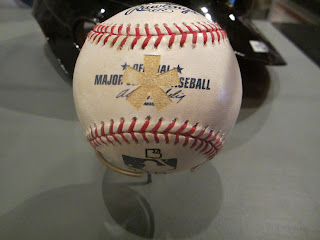 When I went to the Hall of Fame this summer, one of the things I saw that really stuck out was the infamous 'asterisk ball.'  When Barry Bonds broke the career home run record held by Hank Aaron in 2007, he was vilified by baseball fans across the country. 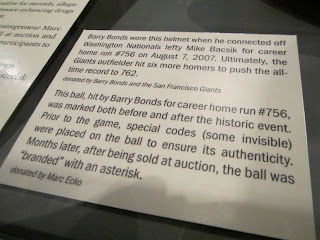 I've never been a Bonds fan, even before the steroid issues.  He always came across as a kind of jerk, so he wasn't a player I really cared for.  I could see myself as a huge Hank Aaron fan had I grown up in his era.  I think Hammerin' Hank got a point across when a previously taped message was aired when Bonds broke his record as opposed to being there in person.  Message received Hank! 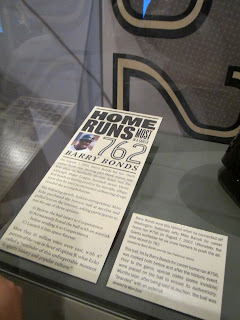 Unfortunately, it doesn't appear as if Bonds' record is going anywhere for a while.  Many felt like Alex Rodriguez would break the record, but injuries seem to be taking a toll on him.  Pujols might have a chance.

I liked seeing the 'asterisk ball' because it is a hot topic still and probably always will be.  I'm glad the Hall didn't sugar coat anything by not displaying the ball.  It would have been nice if they had explained the purpose of the asterisk.  We all know what it means, though.
Posted by William Regenthal at 9:43 PM