It was 53 years ago today that friend of the blog, Virgil Trucks, pitched in his final MLB game.  On September 26, 1958, Mr. Trucks (pitching for the Yankees) was on the losing end of a 12-inning affair against the Baltimore Orioles.  The game featured Hall of Famers Hoyt Wilhelm and Whitey Ford starting for the Orioles and Yankees, respectively.

With the game tied 1-1, Trucks replaced Art Ditmar in the top of the 11th inning and got the Orioles' 8-9-1 hitters out on a fly ball and two strikeouts, respectively.  He wasn't as lucky in the top of the 12th inning, though.  He retired Dick Williams on a fly ball to 2nd base, then gave up a single to Gene Woodling.  With Jim Busby pinch running for Woodling, Bob Nieman singled.  Trucks would then load the bases with one out by walking Gus Triandos.  Bob Boyd would hit a sacrifice fly to center, scoring Busby.  Trucks would then walk Billy Gardner to load the bases again, this time with two out.  Another walk to Jack Harshman would score Nieman, bring the score to 3-1, Orioles.  Finally, Trucks would strike out pitcher Billy Loes to end the inning.

A solo home run in the bottom of the 12th inning would inch the Yankees to within one run, but it was not meant to be, with Gil McDougald fouling out to the third baseman to end the game and handing Virgil Trucks a loss in his final game.  The Yankees would go on to the World Series that year, but Trucks was left off of the playoff roster.  He received a ring when the Yankees won the series, but would not play in the majors after that season. 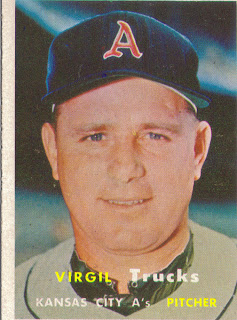 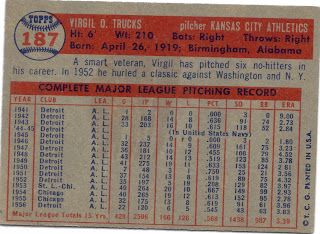 It is with this in mind that I showcase a pickup from this weekend's Raleigh Toy and Hobby Show.  I could have sworn I had the above 1957 Topps Virgil Trucks card, but apparently, I didn't.  I was able to buy it from a dealer for $7.  I later found another lower grade version for the same price of $7, so I feel like I did pretty well.

I've pretty much got his PC locked down, needing only his 1948 Leaf.  That card is his RC and it is a SP, so it usually commands a hefty price tag.  I hope I am able to snag one off of Ebay, much like I was able to get the 55 Clemente.  We'll see...
Posted by William Regenthal at 12:00 PM

Great tribute to a good man. Thank you again for the original introduction to "Fire" Trucks, William!

He is now one of my favorites in my memorabilia collection.........

Awesome post man, dedicated to a gentle giant of baseball! I wish more people would recognize just how great of a player Trucks was, but I guess it's nice picking up his cards for a fairly low price! Good luck on the rookie card man!