I got my 33rd TTM success on Friday, September 9, 2011 (the same day as my Phil Niekro success) from former pitcher Bill Pierce. 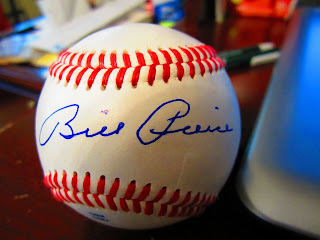 Pierce played in the majors from 1945, 1948-1964 for the Tigers, White Sox and Giants.  He twice won 20 games (in 1956 and 1957) and retired with a record of 211-169, 3.27 ERA and 1,999 strikeouts.  Looks to me like he was a pretty good pitcher who should get a little more love for the Hall of Fame.  Not saying he should get in outright, but a little more thought toward it, maybe.  His HOF balloting was unimpressive (5 years on the ballot and averaged 1.36% of the vote), but I can think of recent pitchers getting much more support with similar numbers. Posted by William Regenthal at 7:10 PM

WIlliam - you have been on fire with your TTM's lately. COngratulations!

Thanks man. Getting a little harder to find out who I should send to next. I need to sit down and do a little more research for the next batch, I think.