Well, as you all know, Drew and I are very close and enjoy talking about cards every chance we get.  Since he knew my birthday was coming up (Sept 14), he decided to surprise me with an early gift.  The gift was actually a box in my mailbox that contained a multitude of baseball goodness.  One of which was the Ozzie Smith baseball that I had asked him to have signed for me.  There was a good bit of other stuff in there too...  Let's start with something off of my 'want list', shall we? 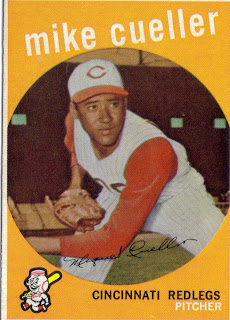 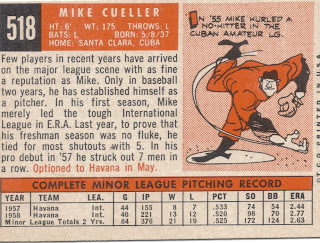 Drew knew that I had been watching this Mike Cuellar 1959 Topps RC for a long time.  I had even sent him an Ebay link to one (happens to be this very card).  The card is beautiful.  A bit off center, but otherwise in mint condition.  I'm really happy to have it added to my Orioles RC collection.

Cuellar retired with a record of 185-130, 1,632 strikeouts and an ERA of 3.14.  those stats don't tell the full story, however.  Cuellar is regarded as one of the greatest pitchers to have pitched in Baltimore (along with Jim Palmer, Mike Flanagan, Dave McNally and Mike Mussina).  He had 4 seasons when he won 20 or more games and two additional 18-win seasons.  He had 4 seasons with an ERA of below 2.75.  That's a pretty darn good pitcher, right there.  He won a World Series ring with the O's in 1970, and would pitch for the O's in the 1969 and 1971 World Series as well, but they would come up short those years.

So, thanks for the early birthday present, buddy.  I'll be sure to post what else was in the box over the course of the next few days.
Posted by William Regenthal at 9:00 AM

Glad you liked your picked out gift! Definitely am happy to help out your Orioles PC!