Something Cool From The Card Show 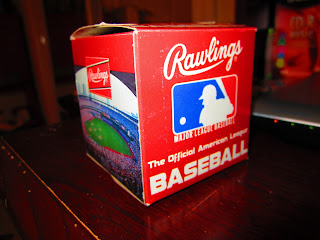 I picked up this Official AL Baseball, new in the box, from a vendor at the card show this past weekend.  I've been looking for older baseballs for some time now and was able to snag this one for only $10.00.  The guy had maybe 4 or 5 more that he was willing to sell me really cheap, but I was on a budget and didn't want to exceed it.

The ball is a Bobby Brown ball, which is really cool, since I just got him TTM.  Would have been a good idea to wait and send this to him, but oh well.

Something I found to be odd/funny, though...  The ball is an official AL baseball, the box even says so, but the stadium pictured on the box is old Busch Stadium.  I saw The Who play there live in 1989.  My first concert... 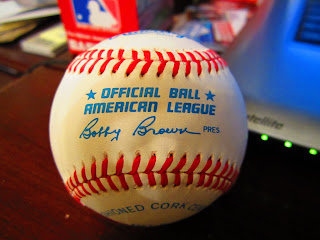 The ball looks great.  The guy told me that they had bought a bunch of them so someone could sign them, and I guess he didn't sign them all.  The box says copyright 1985, so this was early in Brown's AL presidency, which he was elected to in 1984.
Posted by William Regenthal at 7:42 AM

Nice addition to the ball collection man, I seriously would consider getting Bobby Brown to sign it for you, although he has already. Maybe a few bucks wouldn't hurt?