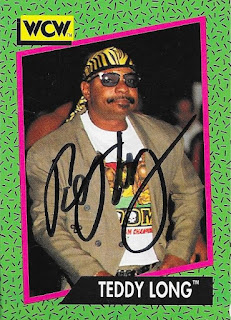 Chris sent off some TTMs recently, and one of the ones that he got back was former WWE personality, Teddy Long.  He sent to of the same card, and gave one of the duplicates to me, which was really nice.

Long (b. 1947) was a referee, manager and executive in numerous wrestling organizations since 1985.  He got his start in Jim Crockett Promotions and would then go on to work for WCW and WWE until his retirement.  He still appears sporadically on WWE programming and was inducted into their Hall of Fame in 2017.

Posted by William Regenthal at 7:07 PM