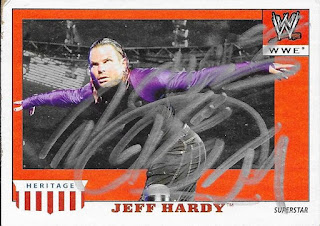 Chris got another TTM success from a wrestler recently, and gave the duplicate to me.  This one is signed by former WWE Champion, Jeff Hardy.  It even came back with a note on the envelope that said "Please do not mail to my house anymore..."  Oops.  Sorry, Jeff.

Hardy (b. 1977) has wrestled since 1994, and made his WWE debut in 1998.  Prior to that, Hady and his brother, Matt, had started their own wrestling organization, Trampoline Wrestling Federation, and wrestled all over North Carolina.

He is a 2-time WWE World Heavyweight Champion, a WWE Champion, 5-time Intercontinental Champion, and 8-time Tag Team Champion in WWE (once Smackdown Tag Champ, once RAW Tag Champ and 6-times WWE Tag Champ; all with his brother, Matt).

Thanks, Chris, for giving me the duplicate card that you got signed.

Posted by William Regenthal at 12:05 AM