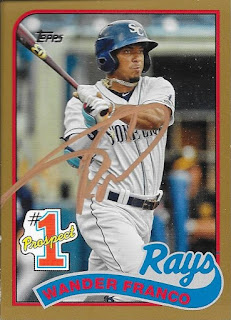 With the Wood Ducks out of town this week and the countdown to Wander Day fast approaching (we all know Wander Franco will be called up soon), I decided to make a trip to Durham and try to graph the Bulls this weekend.  I also used it as an opportunity to break my friend, Tyler, in to IP graphing.  He had never done it before, but has shown interest, so I helped him pick out an autograph book and got him started on his way.  What better way to get him started, than to try to pursue the #1 prospect in baseball, Wander Franco. 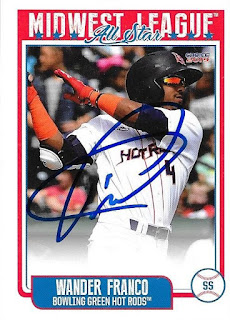 Tyler, Chris and I were met in Durham by my awesome friends, Jackson and Dugan.  Dugan had this Franco Midwest League all star card that he got signed for me last week, so I figured, even if we didn't get Franco, I could leave there with a Franco auto. 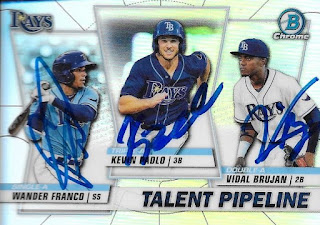 Obviously, we ended up getting Franco.  I was able to get him inside the stadium as he was about to warm up; he had bypassed us outside upon arrival saying he had a meeting.  Jackson convinced me to get my card signed with the copper Sharpie that I brought, and it really looks great on the gold card.  It is numbered to 50, so that was pretty cool, too.
Chris had the above triple card in his book, and got Kevin Padlo and Vidal Brujan on arrival.  We were afraid we would leave without Wander on that card, but a guy we had helped outside (he was new to graphing and didn't even have a pen with him to get his ball signed; so I let him borrow mine) was from the Dominican and took my card (and book) and ran Wander down to get his signed after Wander bypassed Chris again.  The guy saw me with the card and asked why Wander didn't sign, I said "I got him inside, it's cool." and he said no, took my book and ran after him talking to him in Spanish.  Turns out, they had talked about being from the Dominican, and Wander stopped and chatted with the guy again.  He turned out to be a super nice guy, and told us stories about baseball in his country as we waited for other players to come out.  I ended up letting him keep my pen.  It was the least I could do. 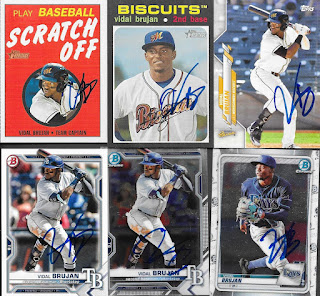 We got Vidal Brujan on quite a few cards.  I think he is going to be a really good player as well.  He's super fast and probably won't take long to get called up.

We didn't miss too many of the Durham players, which was great.  I was up til 2AM Saturday searching and prepping cards and graphing books.  I was able to get a bunch of cards out and prepped, so I was really glad with the results. 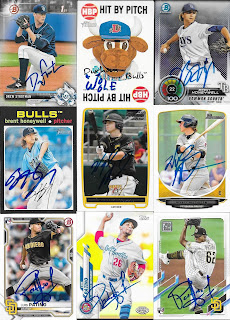 I even got a Wool E Bull card signed while at the game, which was pretty cool.  Apparently, folks go wild over some of these mascot cards, but this one will stay in my album.  I got a couple Drew Strotman cards from Jackson, which helped me out.  I wasn't able to find any of him for some reason.  Brent Honeywell was one per, but the cards he signed turned out great.  Jackson and Dugan hadn't been able to get Luis Patino all week, but luckily, we got him on Saturday; he has an awesome signature. 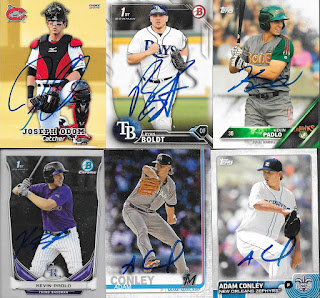 The Joe Odom card came from Dugan, which was nice.  I wouldn't have had anything of him.  Ryan Boldt was one of the tougher guys for me to get (aside from Wander) because no one could recognize him.  We got my one card done, though. 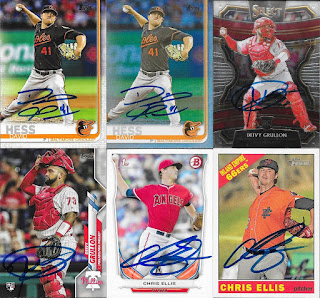 I got David Hess inside after the game, and spoke to him a bit.  He was super nice, and the cards turned out great.  Deivy Grullon was the first guy to stop for us outside, and I was so happy to get the 2020 Panini Score Select signed, since I had to search boxes while watching Cobra Kai Friday night.  Those cards turned out great. 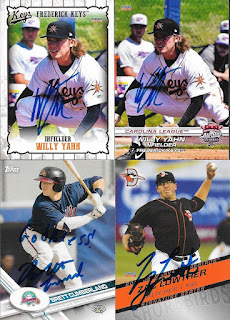 We were able to get a few Norfolk guys on arrival after we got the Bulls that we needed.  Several of the Tides players signed for us, even after a trainer came out of the clubhouse and told us the players couldn't sign due to COVID.  Thomas Eschelman was the only player who refused us due to these restrictions.

I was really excited to get Yusniel Diaz at the game, because I hadn't seen him before.  I recognized him, which was a surprise, and he signed one card for each of us. 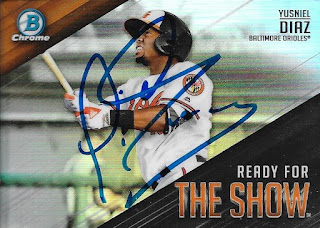 Jackson and Dugan had dipped into my stash of extras when we learned that it was, in fact, Diaz, and they helped me out with the extras. 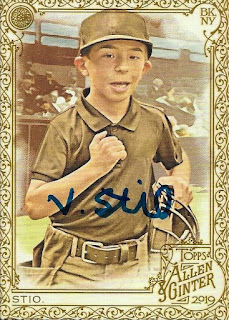 On a whim, I added this 2019 Allen & Ginter gold of Vincent Stio to my snap case and brought it with me.  I knew he lived in NC and went to a lot of games in the area, but was primarily as fixture at Mudcats games.  He's an aspiring umpire, and will dress as one and attend minor league games across the state.  He mimics the umpires movements and has been brought onto the field several times.  I found this card in one of my card shop boxes and knew I'd run into him somewhere.  This was an awesome example of being super prepared.  Chris and I were getting into the line for the all you can eat buffet, and Chris noticed Vincent.  So, I was able to graph a kid younger than my son as a minor league game.  At least he and his dad were cool about it.
My good eye also spotted Ryan Ripken as he was entering the Tides clubhouse, and I had a short conversation with him.  It was regarding a card that I had brought with me that has become a small project of mine.  I plan to finish the card off with a couple of Ryan's relatives, but he signed it for me and enjoyed seeing it.  He is such a great guy, and I was glad to see him again.

So, we had an awesome time at the game and enjoyed the company of my son and friends.  In all we got 65 autographs:

Posted by William Regenthal at 11:30 PM

Wow! That's a lot of signatures! Can't wait to see the Ripken card!