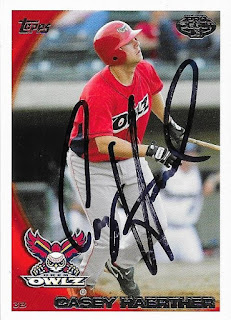 The boxes I got from my former LCS when it closed had a whole bunch of Pro Debut cards from 2010 and 2012. So, periodically, I have taken some cards from those years and sent them off TTM.  I got a few back recently, and this one from Casey Haerther was one of them.

I mailed to Haerther on January 21 and got the card back on February 22, for a 32-day TAT.

Posted by William Regenthal at 12:27 AM