June 12 Graphing of Drive at Dash 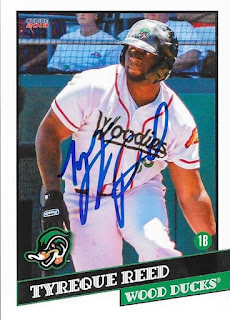 What started off as a decent graphing experience at the Winston-Salem Dash went a bit downhill as my cousin, Alejandro, and I were shut down inside and outside by Dash personnel.  They cited MLB's COVID protocols as the reason why NO ONE could sign autographs.  I found this to be ridiculous, as three people I spoke to got autographs there earlier in the week with no problems.  Regardless, Ale and I were able to get a few autographs before being shut down, so that was a plus.  It was also nice to get Ale, who is 12 (and pronounced Al-E, or Allie), accustomed to graphing.  He showed some interest in going to the game with me, so, Chris hung back and spent some time with my brother, while I took Ale on our first excursion together.  Chris missed out, though, because one of his favorite former Wood Ducks was playing for the Drive, and asked where Chris was.
Tyreque Reed would always fist bump Chris as he came onto the field at Grainger Stadium, until he got injured.  He must have been picked up by the Red Sox organization, so I was able to get our team set cards signed. 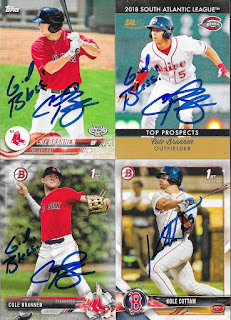 Ale and I got Kole Cottam easily, with no issues.  It was when Cole Brannen was signing for us that a Dash employee informed us that Brannen couldn't sign.  It was news to Brannen, so he told the guy "I'll stop after this one..."  So, it was disappointing, to say the least.  Still, Ale and I had a good time together, and my sister and her husband also showed up in the first inning, so we turned it into a little family time.  Ale got a hat, which he loved.  We tried to graph outside after the game, but were shut down again by a different dash employee.  We complied, but Ale was a bit disappointed there, too, as was I.  He, now, wants to come out here to visit, where I can show him how things are really done, in Kinston.
Posted by William Regenthal at 9:33 PM

At least you made a memory with him.