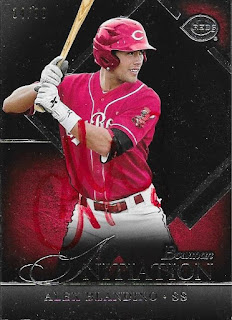 When I pulled this card out of a pack of 2014 Bowman, I knew I wanted to get it signed.  I held onto it for a long time, until I saw that Alex Blandino was signing.  I sent it along, and it came back signed in red Sharpie.  The card was damaged a bit in the mail, which sucks, but the card is now signed and in my album.

I mailed to Blandino on October 1 and got the card back on February 20, for a 142-day TAT.

Posted by William Regenthal at 11:08 AM