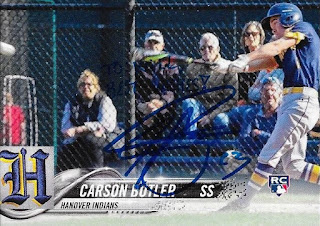 I've met a lot of really awesome people during my time trading cards on Instagram.  One of the first people I met on there, along with his dad and older brother, was an 11-year old Pirates fan, Carson Butler.
I've talked to Carson virtually every day (it seems) since.  I've met his dad and hung out at the National.  I've watched Carson grow up, and now he is graduating and heading off to college.  A couple years ago, Carson sent me a really awesome photo someone took of him playing baseball for his high school, so I screenshotted the photo and made a custom card through Topps' website.  The card above is the result, and I felt like it turned out great.  I ordered a batch and sent them to him as a gift.  He was blown away.

Last year, Carson sent me another photo, but this time, we worked together to make a custom card that he could give out to his family and friends, since the first batch was so well-received.  He really liked the 1952 Topps design (above, left and middle), bur I liked the 1973 design, because you could see his feet as he was coming set to make a throw.  I went with what he wanted, but as an added bonus, I went ahead and created a "short print" using the 73 design.  He loved them both.

Carson signed a few of each card and sent them back to me as a thank you for making the customs, and also for being his friend all these years.  A lot of the folks I've talked to on Instagram (and even this blog) have come and gone, but a few of them have stuck around.  Carson has always been good to me; he has given me advice almost as much as I have given him.  He is one of my best friends that I have made in the Instagram community, and one of my favorite people in life.  I'm certain that Carson will go far in life.  He comes from a great family and has a good head on his shoulders.  I really love that he took the time to sign these cards for me, and I am really happy to add them to my autograph album, along with an autograph he sent me on one of our first trades, back in 2014.  It is posted on this blog; you should check it out.

Thanks so much, Carson!