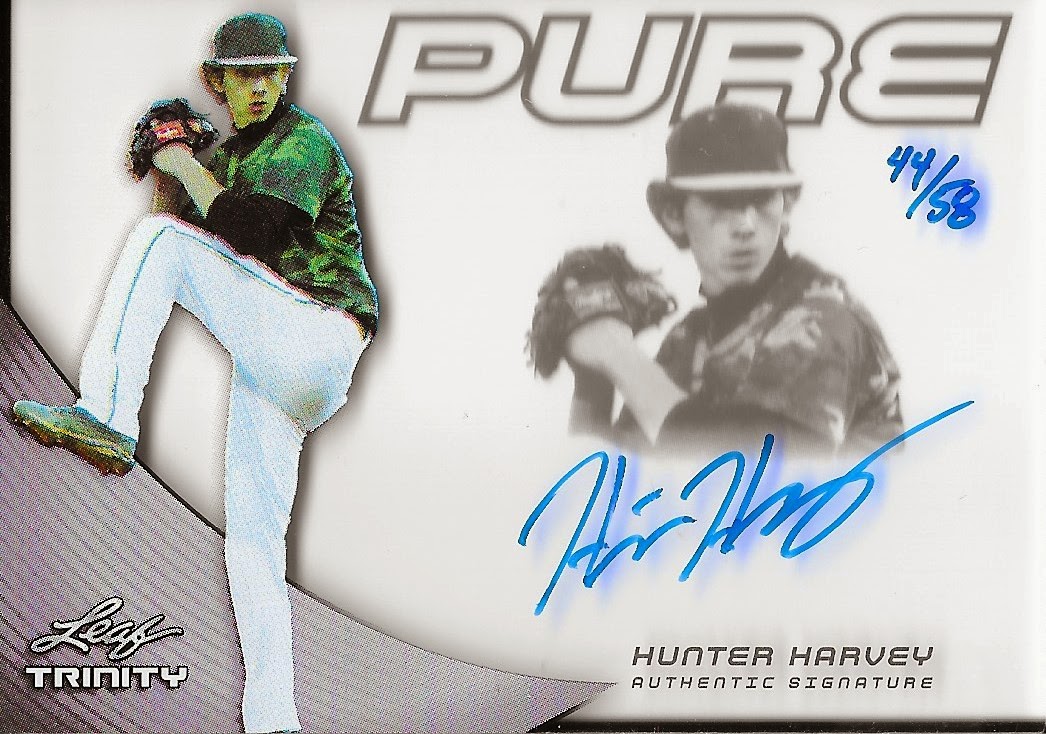 Recently, my very good friend, Michael, told me that he was getting back into baseball cards because of my influence.  After a huge buying binge, Michael had a change of heart and decided that his spending was better served on memorabilia.  While he planned on keeping major PC stuff, like his Pee Wee Reese PC, he decided to quickly part with his newly acquired autos and relics.

This is where I stepped in.  Michael has been a good friend of mine for something like 3 years now, and we talk pretty much every day.  I knew that he needed the money, so I was able to help him out.

We scheduled a Skype session for him to show me everything that he was putting up for sale and I gave him a "Yes or No" to express my interest.  We went through every card he had made available and decided to itemize the cost so I could make payments, yet get the cards.

After going through all of the cards, and letting my initial sticker shock wear off, we settled on a deal.  I was getting a great bulk price on the cards, and he was getting instant PayPal.  Win win for both of us.  Now, you will see all of the hits, and a couple throw ins that I got from my friend.

At the top of this post, you'll see an amazing acetate card from 2013 Leaf Trinity.  That Hunter Harvey card is freaking amazing.  Numbered (by hand) 44/58, it really looks awesome.  Just so you know, the rest of what he sent is just as nice, if not better.  So, here we go!

Michael sent me a couple booklet cards from 2014 Panini National Treasures.  This Adam Jones booklet is especially awesome, since it has the "S" from the back of Jonesey's jersey.  It is numbered 6/25.  Another amazing card.

This Brooks Robinson booklet is a jumbo relic and auto card that looks awesome.  This Brooks is numbered 15/25 and the auto is on what looks like some kind of acetate as well.  I really like how the autos show up on there.  I wish I could get a few more like that or the Harvey. 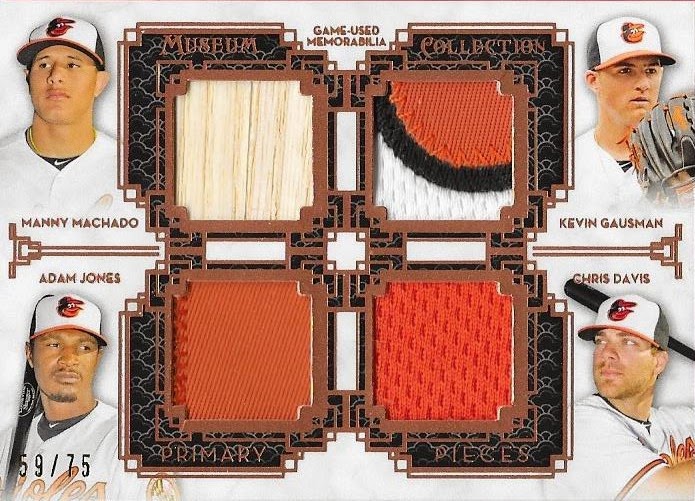 From one of my favorite offerings from the 2014 season was this Museum Collection quad card of Machado/Gausman/Davis/Jones.  I had a couple of these and a couple quads of Davis, so when Michael made this one available, I jumped on it.  This has a bat relic from Machado, a jersey swatch from Davis, a piece of patch from Jones and a 3-color patch from Gausman.  A really nice card, numbered 59/75. 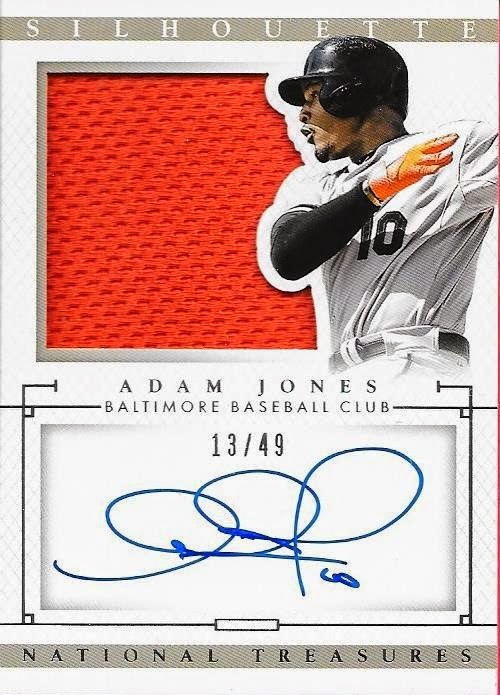 Next up is this jumbo patch/auto card of Adam Jones from 2014 Panini National Treasures.  I was surprised that Michael was willing to let this go, as I thought he was pretty high on this card.  The orange jersey swatch looks awesome scanned, as you can tell.  This card, numbered 13/49, has an awesome example of Jones's signature. 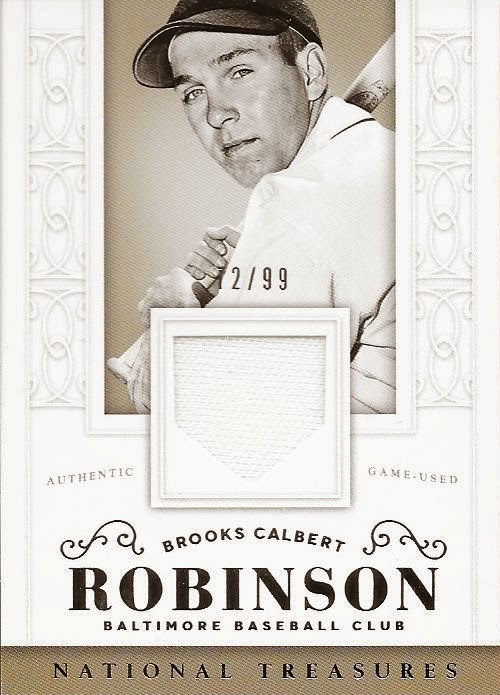 Even more from 2014 Panini National Treasures is this awesome Brooks Robinson relic numbered 72/99.  I had seen this on his Instagram before and wanted to deal for it.  Now, I have it and I am really happy.  This is a great card of Brooks. 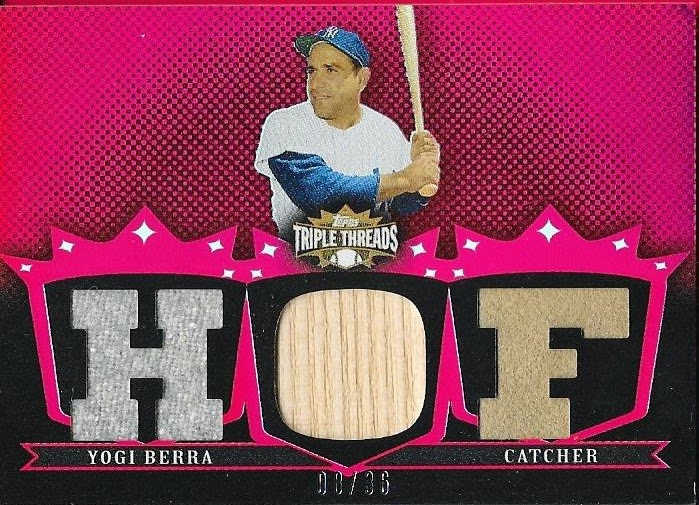 One of the most amazing pieces that I got from Michael was this 2007 Topps Triple Threads triple relic card of Yogi Berra.  Numbered 8/36, this Ruby parallel contains pieces of (flannel) jersey, bat and GLOVE!  This is my first game-used glove card.  So really awesome.  I also love the wool jersey, which makes this the third in my collection.  That would actually be a nice side PC, wool jersey cards.  I am so taken aback by this card.  It truly is epic! 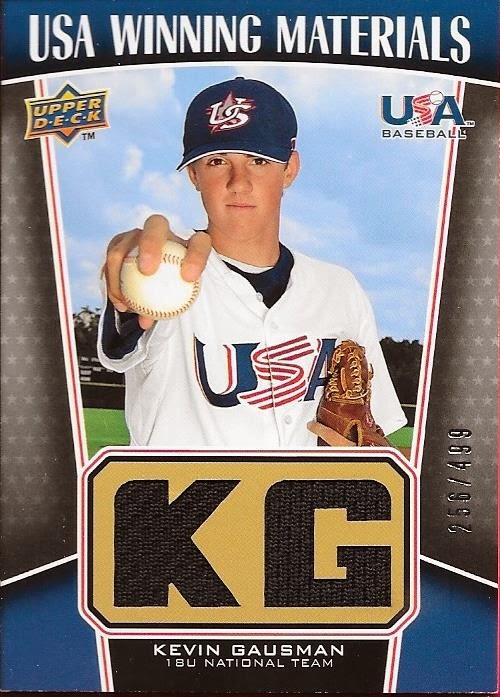 Something had to follow up that Berra, so here is a dual relic card from 2009 UD Team USA.  This card is numbered 256/499.  I have increased my Gausman PC by a great deal, and adding this to my collection puts it right at the forefront of the PC. 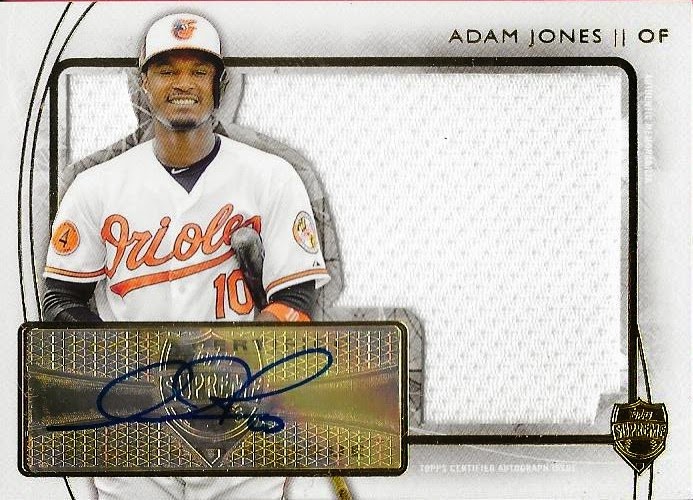 I have seen prices of Topps Supreme stuff and am amazed at how low the price point is for a lot of the stuff that is out there.  Everything I have seen from Supreme looks great, this Adam Jones included.  This 2014 Topps Supreme Jones has a jumbo swatch of jersey and another nice Jonesey auto and is numbered 22/40.  I want to add more Supreme to my collection, too bad Chris Davis wasn't included in last year's set. 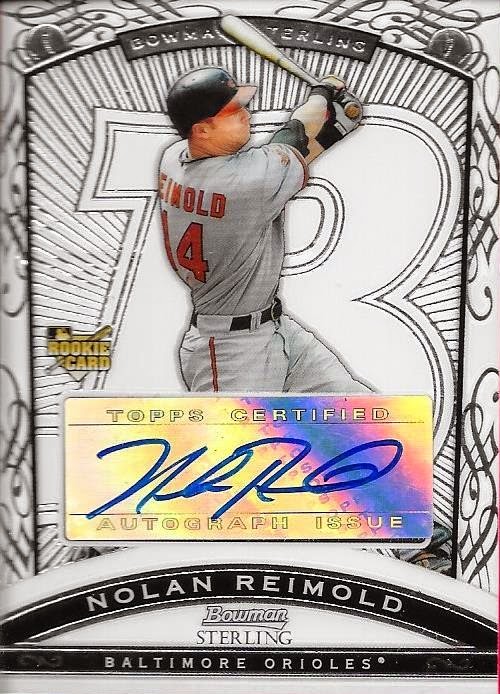 Now, I couldn't let a 2009 Bowman Sterling Nolan Reimold auto out of my sight, so I had Michael add it to my "cart" when he showed it to me.  This is either my third or fourth version of this card and they never cease in their beauty.  I think this year of Bowman Sterling is one of their best offerings of all time. 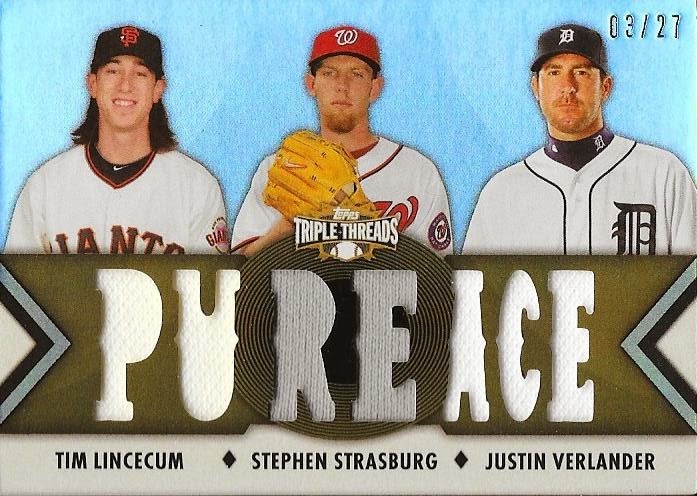 On our itemized list, this card fell toward the bottom of Michael's pricing (which was beyond fair).  His reason was that he wanted Chris to end up with this card.  Numbered 3/27, this 2012 Topps Triple Threads has two relics each of Lincecum and Strasburg and three relics of Justin Verlander.  Chris loved it when I showed it to him, and I told him that it would be his, once I got it in a magnetic case for him. 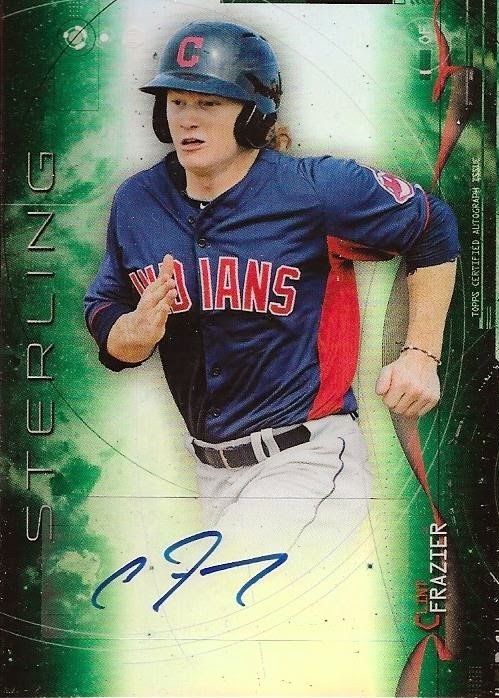 Michael busted a box of 2014 Bowman Sterling recently, and added some of his auto hits from his break into our deal.  This Clint Frazier was one of the cards that I really wanted.  I figured that I would pick him up and hold onto him since he is a really good prospect.  I never really get into prospects, but I thought I would give one a shot.  There are a few other prospects that I would be interested in collecting, but Frazier was at the top of the list of guys I wanted to pick up. 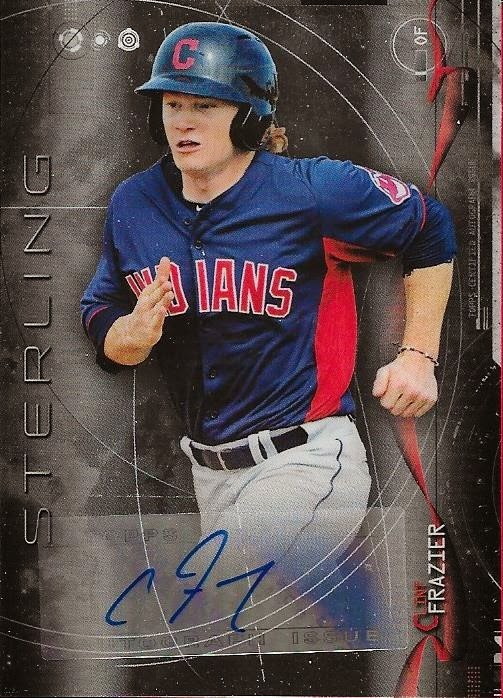 Speaking of Frazier, I went ahead and picked up this base card as well.  I have already fended off kids asking me to trade for this card (and the green parallel), but I don't want to part with the Fraziers at all. 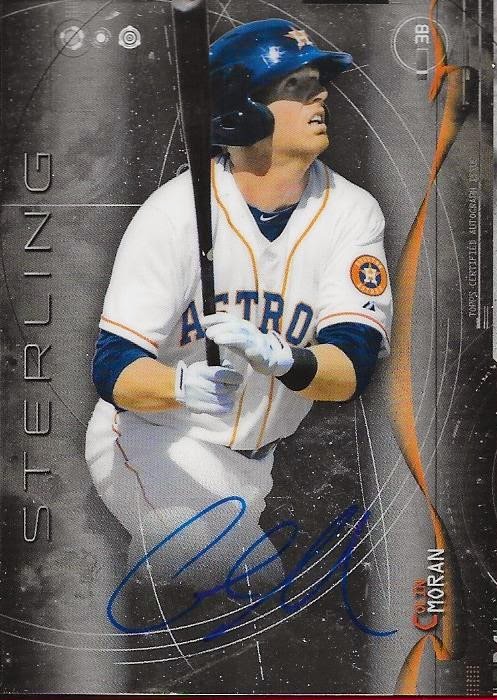 I did, however, pick up a few cards I wanted to use as trade bait.  This Colin Moran is one of them... 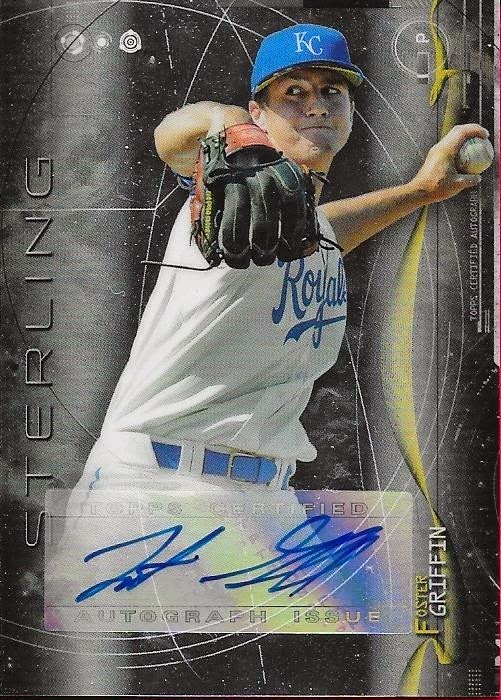 ...so is this Forrest Green (that I won in a "pull" that Michael did). 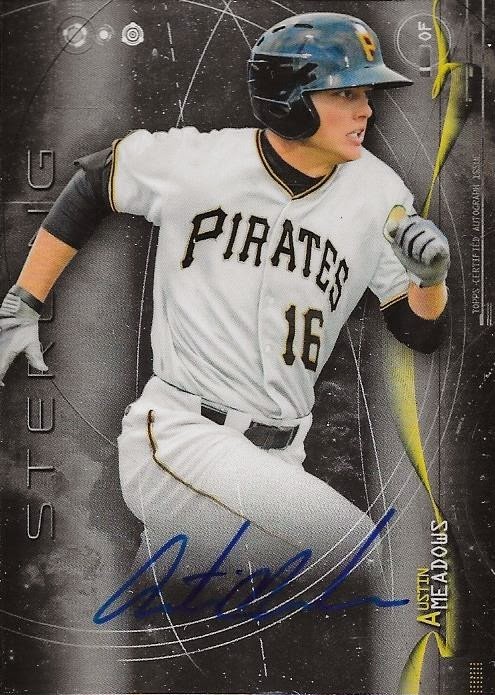 This Austin Meadows is also trade bait, but would command a bit more than the previous two guys. 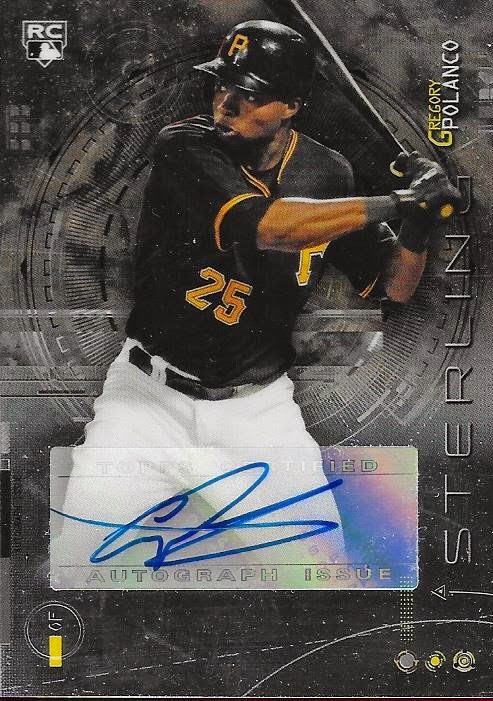 I also picked up this Gregory Polanco for potential trade, but he and Meadows might be guys I would be inclined to hold onto.  I do have to say that 2014 Bowman Sterling looks pretty awesome for 2014.  I have heard a lot of complaining about Topps, but I have to say that there was a lot of stuff that came out in 2014 that looked awesome, so overall, I felt like 2014 was a banner year for cards.  What do I know, though? 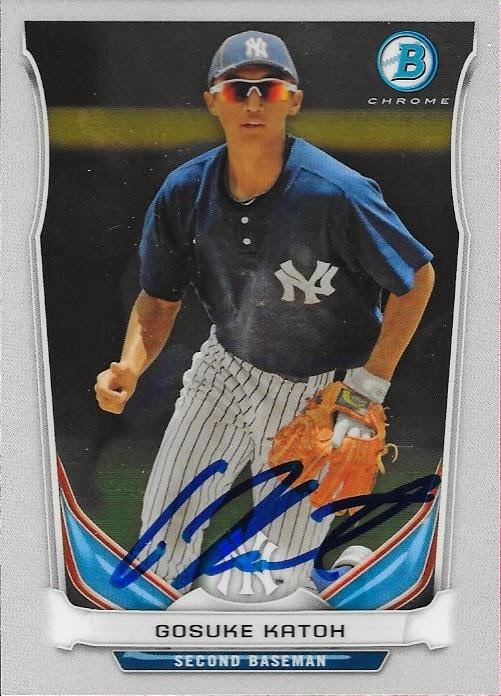 I picked up this Gosuke Katoh to send to one of my friends.  It was pretty cheap and is a TTM auto.  The card still looks great, and I know my buddy will love it. 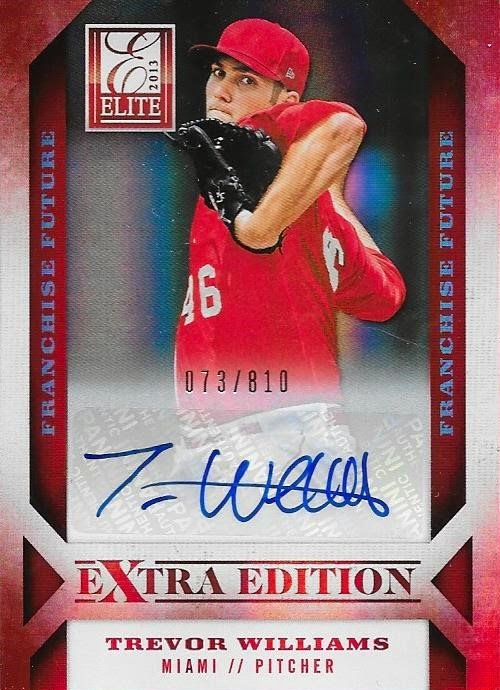 Here is another card from the pulls I did with Michael.  This Trevor Williams numbered 73/810 will be for sale or trade, as I don't know who he is. 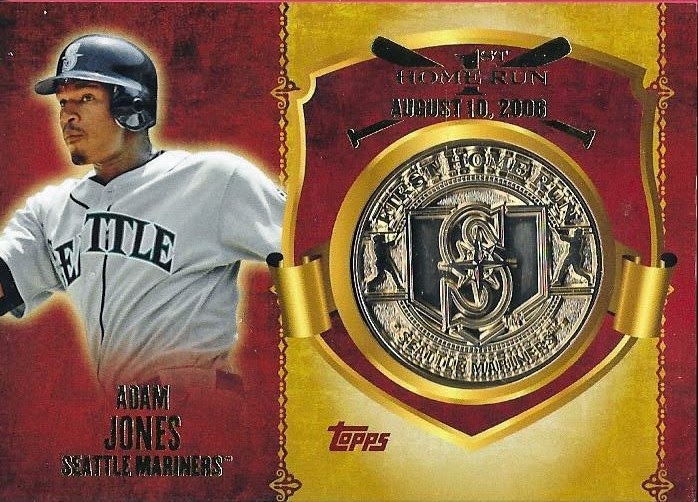 I was happy to add some of the 2015 Topps First home run coil cards.  This Adam Jones and the below Chris Davis both look awesome in person. 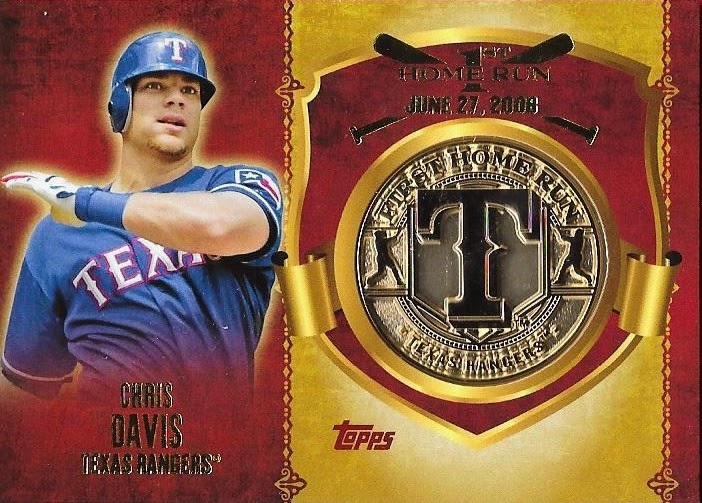 Sadly, the cards don't sell for a lot, so I could have bought one cheaply, but I tried to work out a deal with someone and they wanted WAY too much for them.  Oh well. 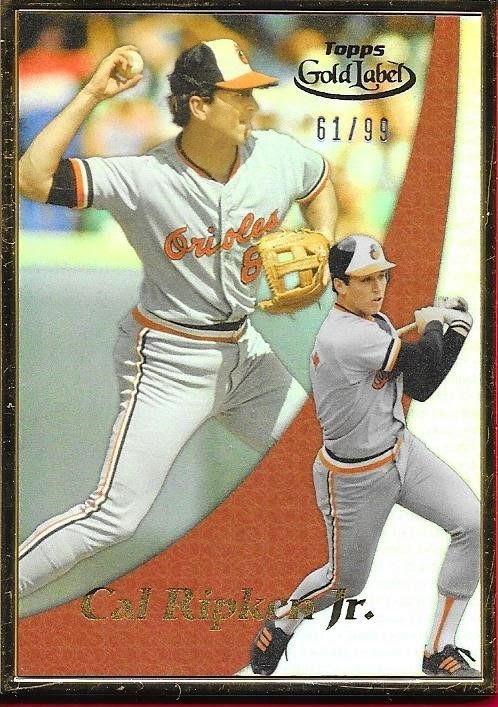 I didn't know that Topps brought back Gold Label cards last year, but Michael threw in this Cal Ripken Gold Framed Gold Label card in our deal.  A rare Ripken that I didn't already have, this 61/99 card looks really cool.  When he first showed it to me, I thought it was the late 90s version, which I have several of, but no, it was from 2014 (and framed), so cool! 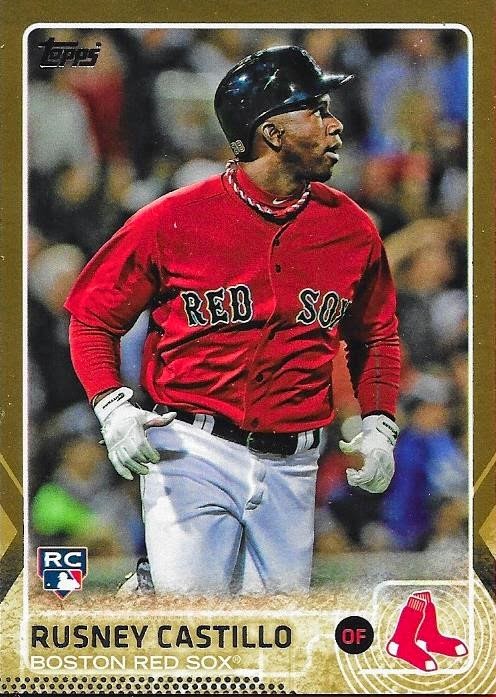 Another prospect card that I plan on holding onto is this 2015 Topps Rusney Castillo gold parallel RC.  Numbered 1,014/2,015, this is a hot commodity right now.  I could probably sell or trade it for something decent, but I thought it would look good in my RC box. 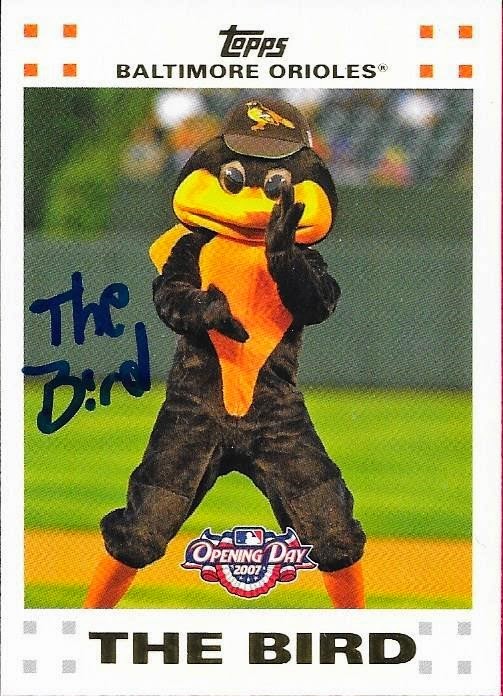 Getting toward the end of the pile, Michael added this 2007 Topps Opening Day card of the Oriole Bird, with an IP signature.  This is really cool, and I will likely add it to Chris's collection.  I think he will really enjoy it. 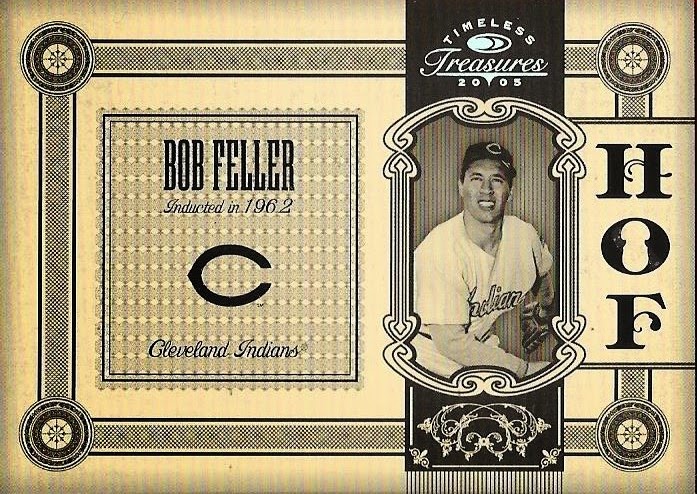 A Bob Feller card for my PC is another throw in from Michael.  Numbered 477/500, this 2005 Donruss Timeless Treasures Feller looks really nice.  I have never seen any of these before, so I was happy to add this. 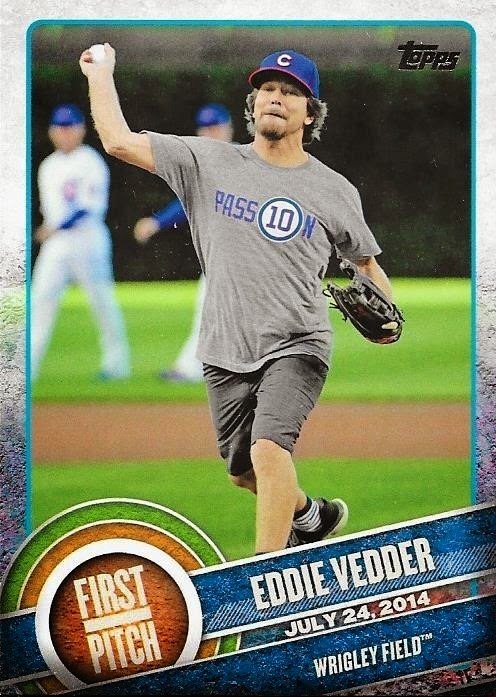 Finally, Michael threw in my current favorite card from 2015 Topps.  This Eddie Vedder first pitch card is awesome.  I already had two in my collection, but Michael knew my love of Pearl Jam, and included it in the deal.  The only complaint I have from this subset is that Topps really should have worked to have autographs included in this.  I would LOVE a Vedder auto, and pulling one would probably put me on the floor.

So, there you have it, my epic deal with Michael.  I was so happy to get this stuff in today.  I told Michael that I would break this up into several posts, but if I did that, there is stuff here in my 'to be blogged' pile that wouldn't get posted til next year.

Thank you so much for the deal, Michael!  I hope the money I sent helps you out.  I look forward to future deals, but let me build some money back up, haha!
Posted by William Regenthal at 9:58 PM