Mailday From Bruce - Continuing To Rake In Awesome Autos and Relics 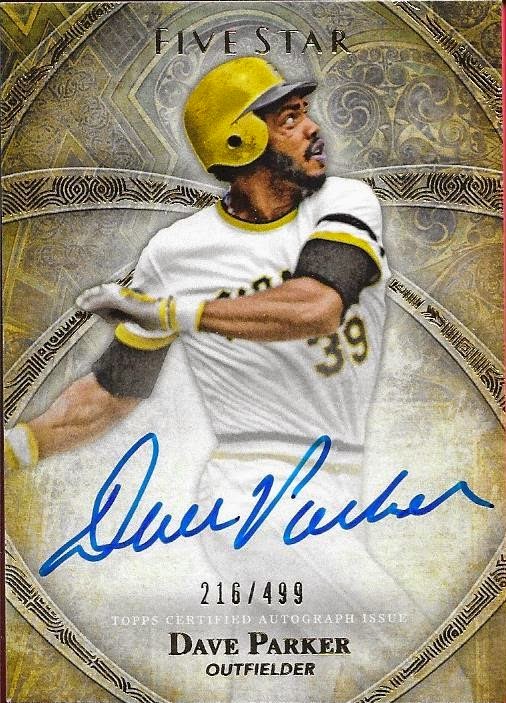 In what has been an increasing trend around here, I completed another huge deal that landed me quite a few nice cards.  I honestly don't remember what I sent Bruce, but I know a couple of the cards I sent him were a Gypsy Queen auto of Neil Walker and a Topps Chrome auto of Andrew Lambo.  This Dave Parker auto from 2014 Topps Five Star was the key to our deal.

This card is amazing (and really darn thick!).  I feel like I got a steal from Bruce, to be honest.  I like Parker and think he really should be in the Hall of Fame, especially since Jim Rice is in now. 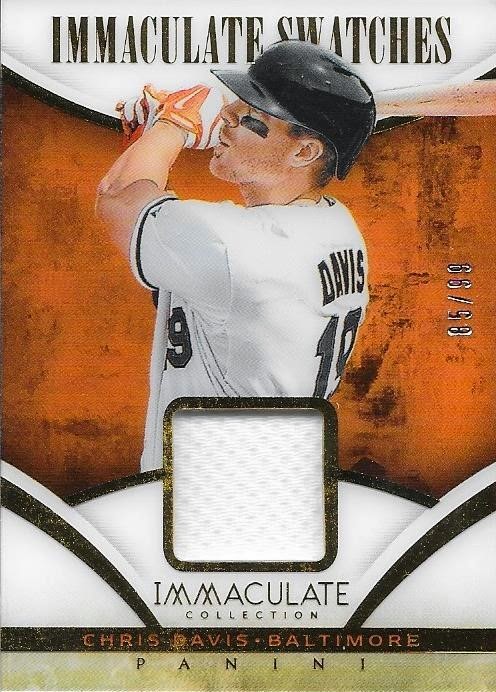 Bruce had this 2014 Panini Immaculate Chris Davis relic posted on his Instagram for quite a while and had told several people that if it ever was for sale or trade, it would only be to me.  Well, I finally was able to pick it up.  The card is numbered 85/99.  I think that Panini did a fantastic job in 2014 with their products.  I know a lot of people don't like that they don't have logos on their stuff, but I, myself, don't feel like it takes too much away from the product.  My only issue is that a lot of their stuff, if it is a two-team market like New York or Chicago, they don't make it very clear which team the player plays on. 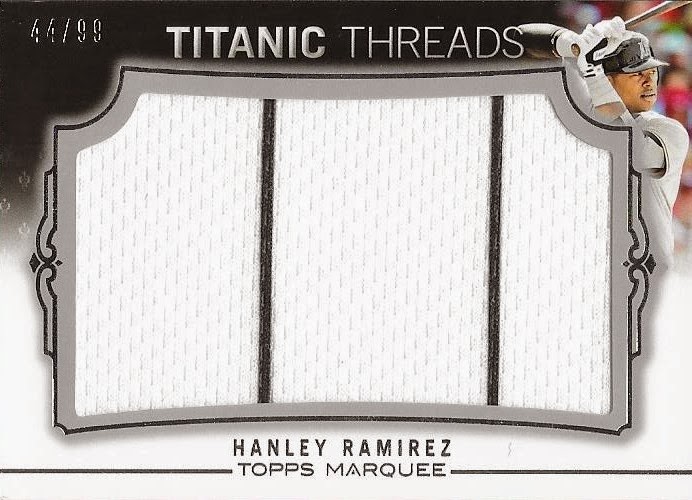 Bruce also included some items as throw ins that I could use as trade bait.  One such card was this 2011 Topps Marquee Hanley Ramirez jumbo relic.  There is a little damage on the back of the card, but I have a feeling that the Hanley fans that I know wont have an issue with it.  We'll see. 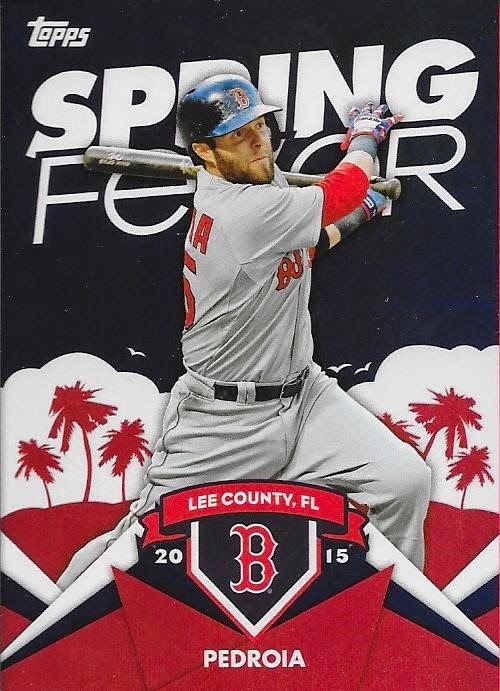 Uggh, Dustin Pedroia on my blog, where's the Lysol?  Bruce included several Spring Fever cards in the package.  Since the owner of my LCS gave me a complete set of these yesterday, I can trade the loose ones that I have.  I know some Red Sox fans who could be interested in this one as well. 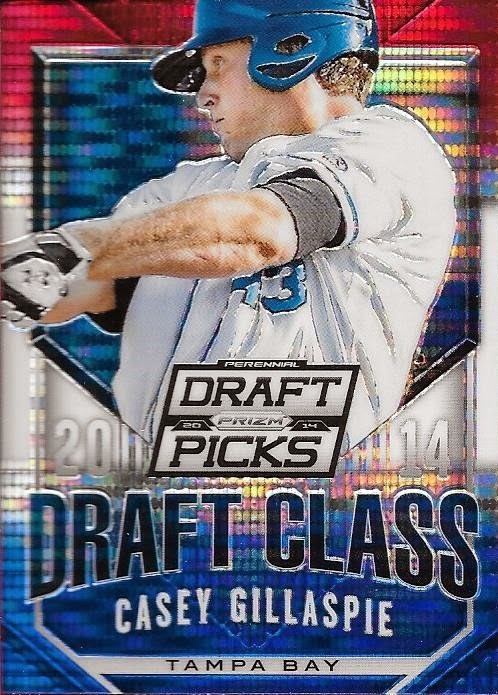 There were a bunch of rookie and draft pick cards in the package as well.  Some of them I might be willing to trade, while others would probably be placed into my RC box and put up for a while.  I always enjoy going through the RC box and seeing who's cards I have that I didn't realize would be stars at the time (this helped me find 3 Mike Trout RCs that I forgot about - even though I still think he is overrated... :p). 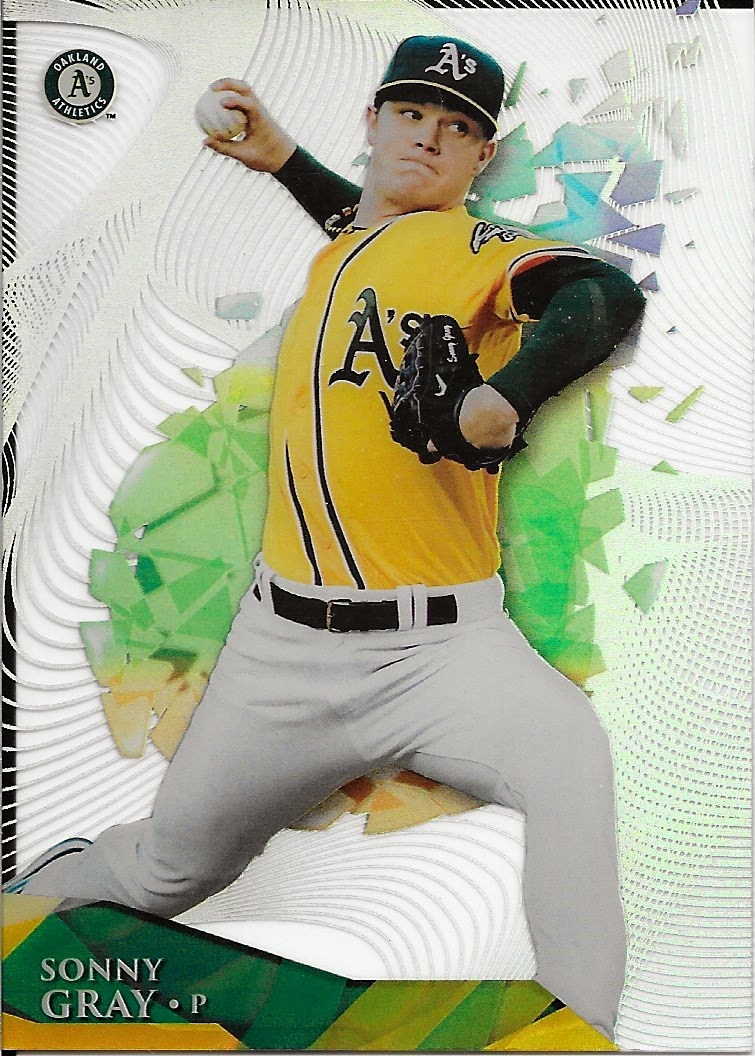 Finally, I close with this 2014 Topps Hi Tek Sonny Gray.  Again, I really enjoy Hi Tek.  There is something about acetate cards that really appeals to me.  I have his auto coming in from this product, it should be here any day.  This will help with my fledgling Gray PC, which has grown quite a bit over the last few weeks.

The cool thing about all of these trades (with the exception of my deal with Michael) is that I have landed all of these awesome cards, yet I haven't spent a whole lot of money.  Now that my wife is back to work after her surgery, money isn't as tight, but during that time, I had been relatively quiet on Ebay.  Now that things are settling down, I can pick up a few more set needs on the 'Bay and continue to work out trades for other PC stuff.  The period of the last few months has been a lot of fun, the wheeling and dealing aspect of it.  I plan on working hard to keep up with my trade bait, and even trading for more.  I learned that I don't always have to trade for PC stuff.  Sometimes, trading for trade bait is even more fun.

Thanks for the deal, Bruce!  I really appreciate it, and you know I love the cards!
Posted by William Regenthal at 11:33 AM