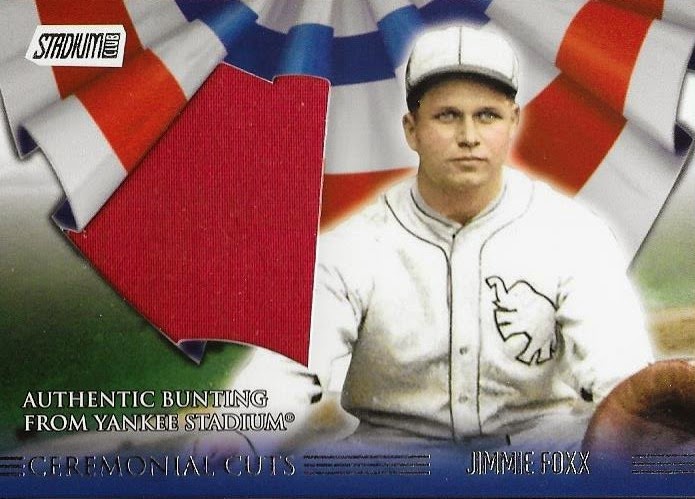 My good friend, P. A. is in Greenville for the evening, so we met up for some showing off of cards and good old-fashioned baseball talk.  P. A. had a huge box of stuff he brought for me that I took delivery of that will help in a lot of facets of my collection.  There were a bunch of cards that he gave me but there was one card in particular that he was really excited about sending my way.

This 2008 Topps Stadium Club card of Jimmie Foxx is really awesome because it contains a piece of bunting from the old Yankee Stadium.  I remember when 2008 Stadium Club came out, P. A. was a huge fan of it right away and came into the old Winston-Salem card shop that I was "working" at and bought a box.  He busted the box with me at one of the tables and pulled this card.  I remember both of us being really excited that he pulled it, not knowing at the time that I would begin a PC of Foxx a few years later.

This card is really amazing.  I was so surprised that P. A. was willing to part with this card, and even more surprised that he gifted it to me.  Thank you so much for the card, P. A.  I appreciate it so much.
Posted by William Regenthal at 10:24 PM