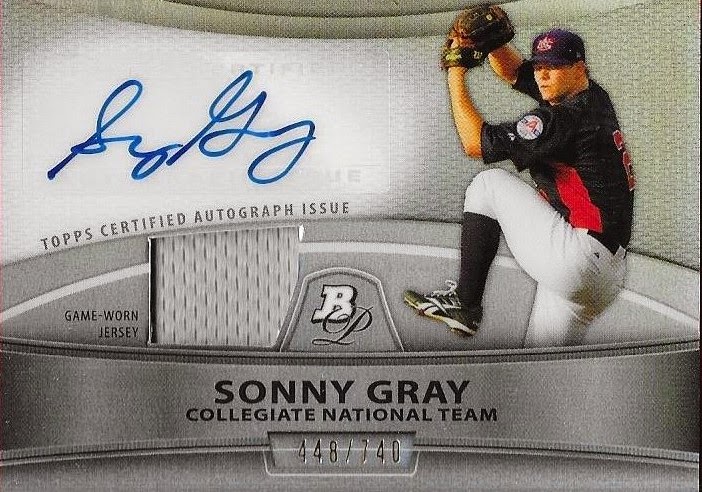 I have been talking to a young man from Instagram over the last few months named Ryu.  He lives nearby, just outside of Raleigh, NC and we have struck up a friendship by discussing cards, trades and card shows.  Ryu is a huge fan of Japanese baseball players, especially Nori Aoki and Ichiro.  I had an Aoki golden parallel RC from 2012 Topps that I dropped in the mail for him, since I had seen it in a pile the night before we met.  I figured, since I knew exactly where I had laid that card, then meeting Ryu, who was a huge fan, he was meant to have that card.  A lot more talks ensued, and I felt that Ryu was a really good kid, and I wanted to do something nice for him.  So, I bought him an Ichiro RC from 2001 Topps, thinking that he should at least have his guy's RC in his collection.  I figured that it was a nice gesture and all, but it was just a baseball card.  I didn't realize just how much a simple gesture would mean to a kid, when I got a package in the mail from Ryu this afternoon.

Inside the package was this amazing 2010 Bowman Platinum relic/auto of my new PC, Sonny Gray.  Equally as amazing was the almost 3/4 page letter from Ryu, complete with a header that he wrote at the top with one simple word: Surprise!

I'm not going to repeat much of what was in the letter, except one line: "I love each and every card you have sent me..."

I have been a part of the card community since I started this blog in November 2008; well, even before that, really, when I was helping at the card shop and people like Babe, P. A. and Pete with their generosity teaching me that it isn't about how much money you can make off of the cards.  It is about enjoying the collection that you have, and being able to take some of the things that you might not need and giving them to someone who will love them.  Seeing how happy I made a young person when he received a golden parallel of his favorite player, or a rookie card of a future Hall of Famer, and also knowing that the person looks up to you and the example you set, well, that is what this community is about.

Ryu is a really awesome kid.  I knew that before he sent me this awesome card.  I've made sure to tell him as well.  I wish and hope that more young people were like him and would work to make this community even better than it already is.

Thank you so much, Ryu.  I am blown away by this card, and the gesture.  I will never forget it!
Posted by William Regenthal at 9:36 PM