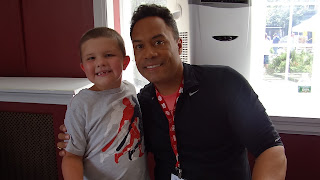 After finally getting Ralph Kiner's autograph, we made out way back to the Tunnicliff Inn for the 1:30 Roberto Alomar signing.  Originally, he was supposed to be at 2:00, but they chenged the signing to 1:30.  We got there right at 1:30 and had to wait til 2:00 for him to get there.  Why change the time, then?  Oh well, we were in line and ready when they called our number.  When Drew and I had originally been looking into the signing events, I saw that the MAB Celebrity Services were going to have Lou Brock, Paul Molitor and Dave Winfield, all guys I needed.  I hoped to get those guys, but in the end, they bowed out of the event.  Alomar was the only guy on the list that I needed for my collection, so I went ahead and purchased a ticket to meet him for $69.00.

Alomar was pretty nice.  When I got to him in line, I told him how much I loved it when he was an Oriole.  He was probably the missing piece that the Orioles needed that pushed them over the edge and into the playoffs in 1996 and 1997. 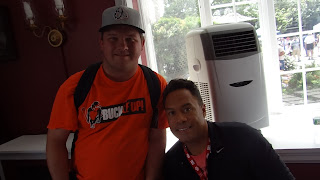 I really should have bent down some in this picture.  I was a little nervous and I always tend to get a bit star struck, so I wasn't really thinking clearly.  I did buy Chris a ticket to meet Alomar in advance, so there were no worries here about him sneaking in and costing me extra.  So, he and I both ended up with signed baseballs. 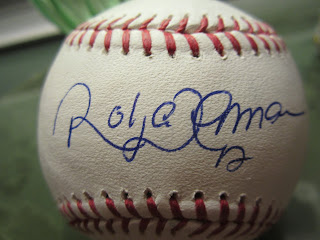 Alomar is my 90th Hall of Famer.  Wow, who would have thought that when I started this collection in 2010, with 3 baseballs that I had previously (Cal, Palmer, Brooks) that I would be all the way up to 90 about 3 and a half years later.  That's insane.  I've got big plans for #100, so I need to knock 9 more out until then.  I think it can be done within the year.  We'll see.  I am taking donations as well, haha.
Posted by William Regenthal at 1:44 PM